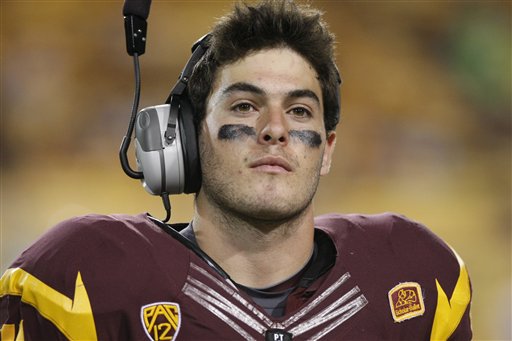 This is the moment Mike Bercovici has been waiting for.

He’s sat patiently, over three years, to be “the guy” behind center for the Arizona State Sun Devils and now, maybe only for a game or two, he gets his shot.

The team-first, redshirt junior quarterback will be the Devils’ starting quarterback when they take the field for the first time next week in their Pac-12 home opener against UCLA. This wasn’t exactly how “Berco” envisioned the opportunity presenting itself but after All-Pac-12 QB Taylor Kelly went down in Boulder deputy head coach Mike Norvell will put his faith in one of ASU’s most likable players.

“Anytime you lose someone who started that many games for you, there’s a comfort level there,” ASU color analyst Jeff Van Raaphorst told Sports360AZ.com’s Brad Cesmat in a phone interview Monday morning. “Bercovici has been around a long time. He was fighting for that [starting] job a couple years ago…now it’s his chance…he’s done all the right things.”

However, there are concerns and questions about Bercovici’s abilities on the big stage as ASU enters the teeth of their schedule with consecutive games against conference powers the Bruins, USC and defending conference champion Stanford.

“I use two different terms to describe the [quarterback] position,” Van Raaphorst explained. “One is a thrower and one is a quarterback. He’s going to have the opportunity to show he has all those balls in his [repertoire]…it’s less is more. By that I mean, the less spectacular plays and huge throws that he does, the better off we’re going to be. By more, it’s more of the simple throws. More of the easy reads.”

“Rapper” knows a thing or two about playing in big games after leading the Devils’ to a Rose Bowl win over Michigan in 1987.

The tickle-down effect from Kelly’s foot injury could reach true freshman Manny Wilkins who now slides into the backup slot and would be next in line if Bercovici gets hurt. Van Raaphorst believes the duel-threat quarterback has a bright future–whenever his time comes and his name is called.

“Very impressed with him mentally,” he explained. “There’s a lot he has to learn about the game physically. The techniques, the routes, the pace of it but from a mental standpoint he’s worked hard. He’s done a good job.”

Van Raaphorst doesn’t believe Norvell needs to tweak the game plan too much with Bercovici because he’s been in the system and knows the offense well. He also says having an extra week to prepare a scheme for their showdown against UCLA on the 25th is extremely beneficial to the quarterback and the first-team offense.