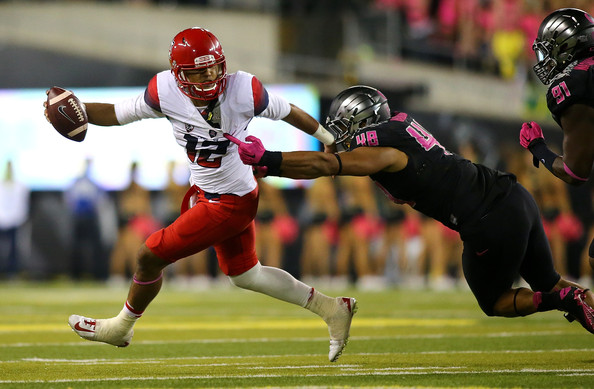 Less than 50 days ago Arizona head coach Rich Rodriguez had a handful of quarterbacks.

Now he may have one Heisman Trophy candidate if the Wildcats, the only unbeaten team in the Pac-12 (5-0, 2-0), continue to impress.

“Anu Solomon is a kid who is playing at a high level,” Pac-12 Network analyst Jake Plummer told Sports360AZ.com’s Brad Cesmat in a phone interview Thursday. “He’s a guy who could crepe into the [Heisman] talk because they’re undefeated and what he’s doing is helping that team win ballgames.”

The biggest coming last week in Eugene where the redshirt freshman from Las Vegas played like a fifth-year senior leading the ‘Cats to 31-24 win over then second-ranked Oregon. Solomon’s performance included 20 completions in 31 attempts for 287 yards and a touchdown. He was intercepted once but many of his yards came in the second half as Arizona outscored the Ducks 28-17.

Plummer says Solomon is far from perfect and warns there are plenty of land mines and good defenses ahead, starting Saturday night in Tucson against a USC team who’s still licking their wounds from last weekend’s “Jael Mary” against Arizona State in Los Angeles.

“As he’s slowly fallen into his role as a leader I think his teammates know, ‘let’s just roll with this kid,'” Plummer told Cesmat. “He’s not going to be perfect every play or every drive but the things he’s [doing], you’re rarely going to see those plays being made [by a freshman]. He’s confident. You can see it.”

To think two months ago he was just one of many UofA quarterbacks looking to catch his head coach’s eye.

“Anu beginning” for sure.