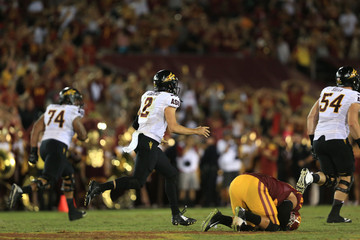 It is safe to say the perception of Mike Bercovici in the college football world changed on Saturday night. ASU couldn’t really go into a hostile road environment with a young defense and a backup quarterback and win right? It may not have been pretty from start to finish but they got it done behind the redshirt junior signal caller after an improbable Hail Mary play to Jaelen Strong.

It has been a couple days now since the “Jael-Mary” and Bercovici has been able to settle in, reflect and feel the overwhelming sensation of making a game-changing or even a season-changing play in the national spotlight.

“It’s been text messages, voicemails, twitter notifications, instagam likes,” he said Monday to Brad Cesmat. “It’s been awesome. I appreciate everyone from my family, friends and fans who have been so appreciative after that Jael-Mary.”

ASU practices their Hail-Mary play every thursday during practice and Deputy Head Coach and Offensive Coordinator Mike Norvell always puts the pressure on the players to make the play even though it is something they have not yet had to do since any of them had arrived in Tempe. Bercovici explains what the plan was and how it was executed from his perspective.

“Basically there are three levels to the throw with the middle guy being Jaelen,” explained Bercovici. “Cameron Smith is the deep guy and D.J. Foster is the short guy to be there ready for a tip. You are supposed to throw it to toward the middle guy but to be honest, I just threw it as high as I could and it found Jaelen who is considered the point man.”

“It came out clean,” he added. “And he was able to just walk into the endzone.”

One of the best images from after the score and the win was an elated Bercovici who just fell onto the field face first before being mobbed by his teammates.

“I was pretty fired up there in the fourth quarter,” he mentioned. “When I realized there was no penalties and saw the clock hit zero, I just started sprinting. I felt like I had no idea what had actually happened so I just decided to take a nose dive and hit the ground. I was overly emotional.”

It will go down as one of the best plays in the history of the program understanding the magnitude of it, and the location of where it happened as ASU historically has not been good at USC. Jaelen Strong walked off the field and went to the post game press conference podium with the football, but who was able to keep it?

“Coach Graham ended up giving out two game balls,” he said. “He gave one to Jaelen and one to myself. There is a little bit of a conspiracy to which one is the actual throw but after the game, I gave it to my Mom and I think we’re going to frame it or it will be the new center piece on our dinner table.

For just about anyone watching, this game seemed all but over when the Sun Devils trailed 35-24 with just over three minutes left. Bercovici would not let up and kept the team fired up and focused on the sidelines. He’s words and his intensity clearly played a factor in the comeback for the Sun Devils.

“We are a team that thrives off adversity,” he explained. “We have character and a value system that puts us in a situation to succeed in that situation. I kept going to the offensive line and telling them ‘keep giving me time, keep giving me time. We have plenty of time to make this happen.’ Our whole entire team was up on the sideline, no one was sitting on the bench…Everyone knew as long as there was time on the clock, there was hope.”

A lot has been made of Bercovici’s decision to stay with the program over the last couple of years and never more so than when Taylor Kelly went down with a foot injury at Colorado and he would finally get his chance. The quarterback acknowledged the fact that leaving crossed his mind and was brought to his attention from those he cared about, but he knew what he wanted at the end of the day.”

“Back in 2012 when the coaching change happened, it brought up a lot of factors from people who loved me that it would be in my best interest to go somewhere and play,” stated Bercovici. “But I used to dream of a moment like this a long time ago and that is one of the reasons for why I stayed to be a Sun Devil. It was because when I closed my eyes and dream of throwing a Hail Mary, I would want to do it for the Sun Devils and nobody else.”

“The sour taste in my mouth of everything about leaving resigned with me and the fact that I was here to help support the team, some of the guys I came to the school with, it just couldn’t be any sweeter.”

In a society now-a-days where if you don’t get an opportunity right away, the first thing a person thinks is leaving for another situation that they could the chance rather than sticking out and working for your opportunity, Bercovici’s story is in the minorty and should be the example. That is for other quarterbacks at major programs who are good enough to play but not the starter, or for any person battling through adversity in the working world.

“They can take a little bit of my situation and help them because it isn’t easy,” he stated. “I am not going to say it was easy sitting for four years or whatever but to be able to play for the team that brought you into college football is just a satisfying feeling and it just really proves that the team is bigger than you. We call it ‘big team, little me.’”

“I don’t know if there are going to be any more adverse situations in my life but it has taught me that if I just stick through it, it’s not always easy but it pays off.”

Pleased to get the commitment from @eliavgabay to join the @Sports360AZ team! I've never been big on number of stars next to a person's name, but he's a five-star recruit IMO
View on Twitter
3
0

@eliavgabay @Sports360AZ Eliav back in the Valley👀?
View on Twitter
0
1