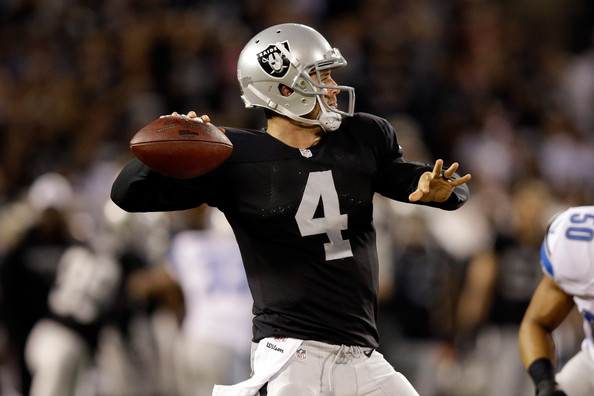 Few things have gone right for the Oakland Raiders this season but there may be a silver (and black) lining after all.

They don’t have a win but they have found their quarterback-something they’ve been missing on a consistent basis for quite some time.

Rookie second-round pick Derek Carr, coming off a 282-yard, four-touchdown performance against the San Diego Chargers’ high-ranked pass defense last week, will be making his sixth-career start when the NFC West-leading Arizona Cardinals (5-1) visit the “Black Hole” on Sunday. He’s one of the reasons many believe the Cards need to be on upset alert in the Bay Area this weekend.

“I remember around the time of the draft,” SI.com senior NFL writer and ‘Monday Morning Quarterback’ editor-in-chief Peter King explained to Sports360AZ.com’s Brad Cesmat in a phone interview earlier this week. “Steve Keim and Terry McDonough of the Cardinals telling me how good Derek Carr was going to be.”

The early results have been positive and 6’3, 215-pound Carr is on pace to throw for around 3,200 yards, 26 touchdowns and 16 interceptions. Those numbers seem even more impressive when you consider Oakland enters week seven second-to-last in the league in rushing at just 72 yards a game. He’s also working with a collection of mostly obscure receivers, sans former Green Bay Packer wide receiver James Jones who leads the team in receptions (26) and yards (328) and is tied for touchdown receptions (three).

Carr has been lauded in NFL circles for his leadership skills, holding teammates accountable and quickly grasping the speed and various nuances of an NFL offense after starring in the Mountain West Conference at Fresno State.

“I said, ‘boy, I bet the Raiders got a good bargain here,'” King told Cesmat. “He has got great presence on the field. I like his arm. I think Oakland might have their guy.”

I’m pretty sure the Cardinals and the rest of the league feel the same.