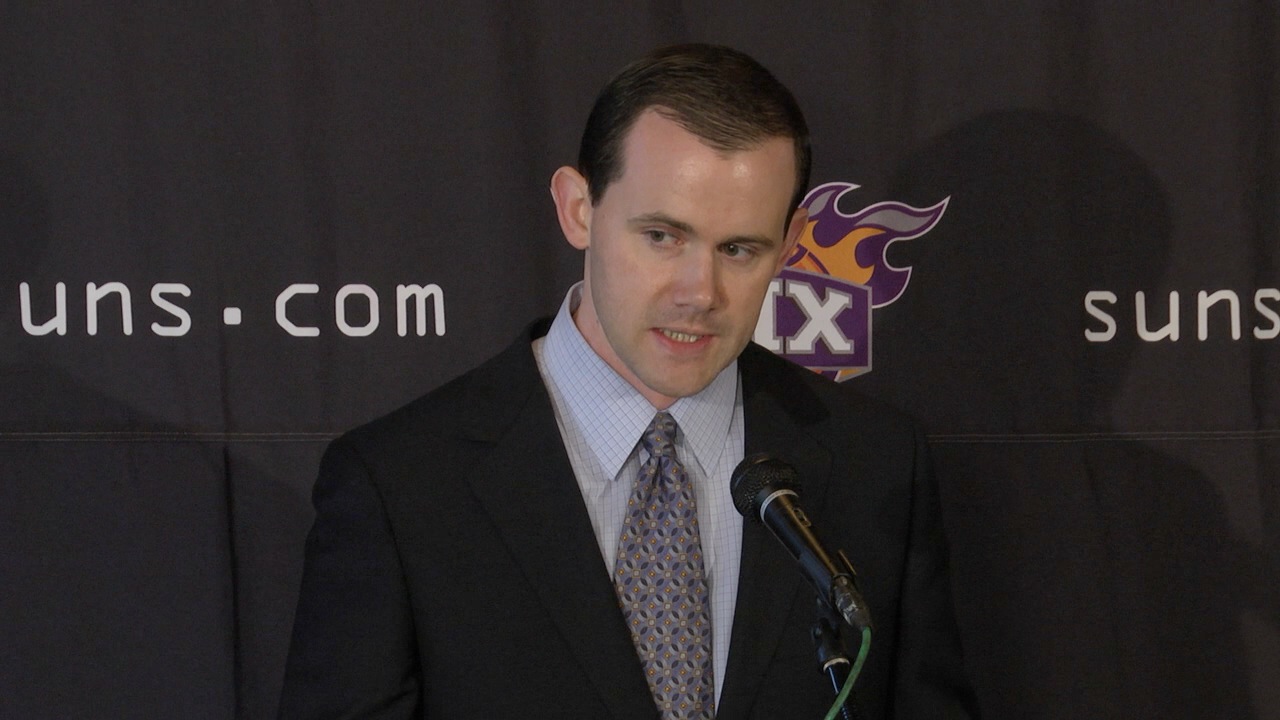 The Phoenix Suns open the regular season on October 29 hosting the Los Angeles Lakers. Jeff Hornacek’s team is looking to build off their surprising 48-34 season a year ago and return to the playoffs for the first time in five seasons. It also marks the second season for General Manager Ryan McDonough who came over in May of 2013.

Sports360AZ.com’s Brad Cesmat recently had a chance to catch up with the 34-year-old to discuss a number of topics around the Suns and the direction of the NBA.

Here’s our ‘Starting Five’ with McDonough.

1. What did you think about Robert Sarver calling out the Spurs on Thursday during the game? “Well, I think Robert and a lot of us with the Suns can only worry about what we can control and what we can control is trying to put a product on the court which is entertaining and exciting for the fans to watch. I think we did that [Thursday] with the way we played. We scored a lot of points. The opponent, I guess, wasn’t what we thought it would be and what the fans…probably did expect when they bought their tickets. So…it has nothing to do with San Antonio. They have a right to do what they want to do as a team and as an organization but at the same time ya’ know Robert is very committed to the fan experience…because what they paid for and what they got are probably two different things.”

2. What do you like most about the Suns at this point in training camp? “I like our versatility and I like our depth…especially in the backcourt and on the perimeter. We have a lot of firepower I think in our backcourt. If Eric Bledsoe and Goran Dragic end up starting, we bring Isaiah Thomas and Gerald Green off the bench. Those two guys are capable of going for 20 or more points a night…offensively I have no question that we’re going to be fine.”

3. What questions do you need to get answered before the season opener? “No major concerns, Brad. I think at the center spot we need to get healthy…Alex Len has been cleared to play after re-fracturing his pinky which was obviously good news. We’ll try to work him in slowly…hopefully have him practice soon if everything goes well and get him into a game or two before pre-season ends. Try to get him back in-rythm…we don’t have Channing Frye this year but Earl Barron has come in and done a nice job for us in training camp.”

4. Where are you in terms of possibly shortening the length of NBA games? “Well Brad, just my opinion and I don’t speak for the Suns, what I personally feel is I don’t like it. I think it does put more pressure on the coaches to play their star players longer and then it decreases the minutes for your bench players. The other thing is I don’t know where this big out-cry is coming from and if there even is one about the length of NBA games. If you look at the length of our games in general I think they’re 2:15, 2:20 minutes. As you know that’s significantly shorter than an NFL game or a Major League Baseball game that can run three to four hours sometimes depending on the pace of play so I don’t have a problem with it. I’m not in favor of shortening the games. The other thing I think which doesn’t make a whole lot of sense of the 44-minute games is the travel is the same. That’s another big issue. Personally, I think there are other ways to speed up the game…if we could get into and out of timeouts quicker. If you could maybe eliminate a timeout even.”

5. Do you believe getting rid of back-to-back games would help, as well? “Yeah, I’d be in favor of that–spacing out the schedule a little bit more. I can get a little tricky with the obligation to the national TV partners. Turner, ESPN and ABC have certain days and times where they like the games so some of the back-to-backs are created because of that but…I’d be in favor of that. I think the players would, as well. One of the things is this is the first year with an extended all-star break. Each team having a week off over all-star weekend. I understand why the players wanted it but I’ll be curious to get their take at the end of the year.”