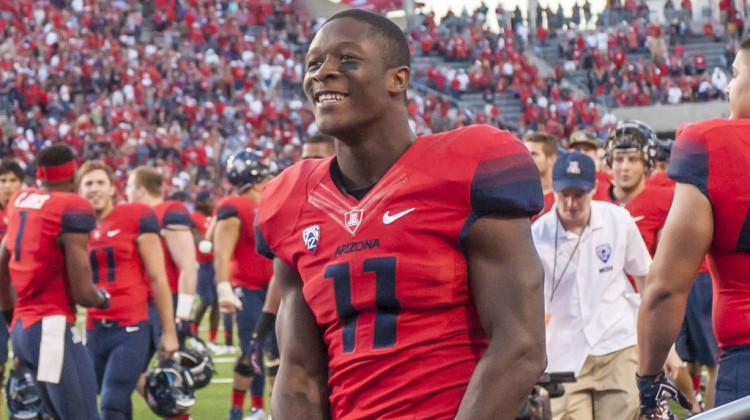 To really understand a person, it’s best to know where they have come from.

When you look up and down the Arizona Wildcats 2014 roster, safety William Parks has traveled close to the farthest of any player coming from North Philadelphia, PA.

The high school he went to has been in the national spotlight for over a year now. Parks went to Germantown High School in Philly where he played football and was an All-Southeastern Pennsylvania First-Team Defense performer. But the school itself was in a tough area of town.

“They would be worried about kids when they got out of school at 3:15,” said Parks. “Between 3:15 and 4:00, a lot of stuff could happen. People came up to the school with guns, there was plenty of time where we were at the bus stop and there would be a shoot out there in the middle of the street.”

Germantown’s rival was Martin Luther King High School and when Parks was in high school, there was several instances of violence between the different neighborhoods which fed into each school. Back in 2012, after Park’s freshman season at Arizona, Germantown High School shut down.

“A lot of kids who went to my school which is Germantown, went to King,” explained Parks. “Initially, they were worried about that because a lot of those kids come from different neighborhoods and they always had trouble with each other. Back when I went to school there, some kids from the King area came to Germantown and they would get into fights every day.”

In 2013, there was a documentary filmed called “We Are King,” which was the story of these two schools essentially merging and the violence and differences that came with it which made it a very hostile school to attend. But the football team in its’ first season went on to win a section title which helped defuse this hostility a bit and has moved things into a more positive direction.

Parks’ road which led him to Arizona was very close to never happening. He was originally committed to Pittsburgh and had been for a year. But in the final stages of his recruitment there was a coaching change and Parks re-opened his recruitment.

It was then that he got in contact with Tony Gibson, who is now the defensive coordinator at West Virginia and at the time, was the safeties coach joining Rich Rodriguez in year one at Arizona.

“Coach Gibson said if you love me, you would love Coach Rod,” recalled Parks. “I met Coach Rod the second to last week of January, just before signing day and I am so happy I did. He takes care of you, he’s on you all the time and he gets the best out of you.”

“13 hours after first coming here to Tucson, I committed,” Parks added. “I loved it here and I think it is crazy how things happen for a reason.”

Oddly enough, that coach that had left Pitt was Todd Graham, who left to take over as head coach for Arizona State. It now brings to life a funny dynamic as Parks suits up for the school that rivals the program that is coached by the person he was originally going to play for.

“It was funny because I didn’t know that he was going to go to ASU right then and there,” explained Parks. “I had been committed to Pitt for quite some time and when I went there for my visit, Graham had already left. When [I was] there, it just didn’t feel like how it used to when Todd Graham was here. Then weeks later when I came out to Arizona, I learned Graham had gone to ASU and I thought the coincidence was crazy!”

Parks ended up being a member of Rodriguez’s first Arizona recruiting class and not much later, was one of six defensive players that suited up for the Wildcats as true freshman. As a sophomore last season, the coaching staff was having trouble keeping Parks off the field with the plays that he was making. No situation was more evident of that than the pick-six he had in the AdvoCare 100 Bowl against Boston College which resulted in him being named the MVP of the game.

It is the versatility that Parks has shown to play so many different roles in the Wildcat secondary which has allowed him to be a starter every week this season.

“That was key in my being able to play in this system was the fact that I can play all three safety positions and be able to play corner as well,” mentioned Parks. “I definitely know every position on defense, especially in the back end and I think that was a key part in my transition. It’s been working out but I definitely need to get better.”

His playmaking ability and versatility has allowed the defensive coaches to even take some more risks. That has been seen in them bringing Parks up to the line of scrimmage to make plays and the result, over the last three games, he has three tackles for loss. He had just a half of a tackle for loss all of last season.

Parks and the Wildcats are still in a position to reach places they have not ever reached. With three games remaining, there is a shot, if they win out, they could represent the Pac-12 South in the Conference’s Championship game. It will not be an easy road, but Parks knows what they team needs to do to stay in the running.

“We’ve just got to stay humble,” stated Parks. “The next three games will be tough as we have Washington, Utah and Arizona State. All those teams are pretty consistent and good on offense. There is nothing that we can’t handle. We just have to stay focused and humble. That’s the biggest thing.”