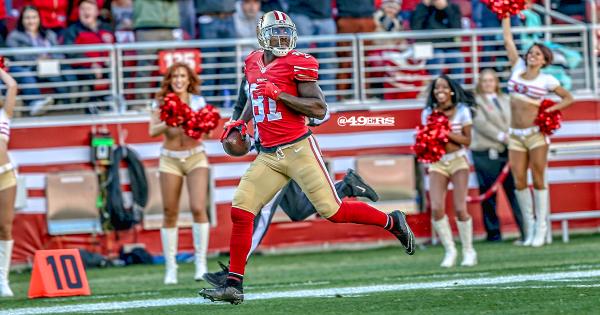 Two For the Road…Jim Harbaugh was given a game ball and Gatorade bath after his final game on the 49ers’ sidelines. “I’ve had the time of my life,” he said with a chuckle after the 20-17 win. As for the Cardinals, whose defense struggled the past two weeks, they’re off to Charlotte for a matchup against the 7-8-1 NFC South Champion Carolina Panthers. It’s a cruel punishment for the 11-5 Cards and a rule the NFL needs to address this off-season. Arizona is hoping playoff history repeats itself dating back to their 2008 Super Bowl run which started against the Panthers.
Q School…like fine wine Anquan Boldin just keeps getting better with age. The 34-year-old pillar of consistency burned his old team again getting behind the Cardinals secondary and outracing safety Rashad Johnson 76 yards in the first quarter. It marked his 70th-career touchdown. Boldin, who just completed his 12th NFL season, could reach 1,000 catches next season.  To think the Ravens parted with “Q” for just a sixth-round pick two seasons ago is still mind-boggling.
Kaep Room…it had to have been a frustrating for Calais Campbell, Tommy Kelly, Dan Williams, Alex Okafor and the rest of the Cards’ defensive front who must have felt like they we trying to catch a squirrel in the forest chasing Colin Kaepernick in and out of the pocket. Arizona’s defense came into Sunday with 26 sacks in their last seven games. They managed just one against a QB who had been inexplicably been dropped over 50 times entering the game. The freakishly athletic quarterback continues to be a Rubik’s Cube in 2014. He finished the day 15-26 for 204 yards and two touchdowns. He added 63 on the ground and finished with a quarterback rating of 108.5.
Really Good, Really Bad…after a soap opera week of being benched, then elevated back to starter after word leaked of Drew Stanton’s latest surgery Ryan Lindley experienced the on-field ebbs and flows Sunday in the Bay Area. For the most part he looked like a completely different quarterback than he did a week ago against “The Legion of Boom” in Glendale. He threw his first two career touchdowns (both to Michael Floyd who played arguably his best game of the season), but threw three drive-ending interceptions and would have had a few more picked if not for receivers turning into defenders.  Lindley found his best success on intermediate sideline routes where he showed both touch and accuracy. You can bet Bruce Arians, Tom Moore and the coaching staff will keep those in the script next weekend.
Lost Momentum…no team, possibly in the history of the NFL, has experienced the misfortune Arizona has been through in 2014 dealing with seemingly endless key injuries. Arians and his staff have been applauded, and rightly so, for continuing to plug the leaks in what many felt was a sinking ship weeks ago. You have to wonder what the mindset of this team is now coming off two difficult NFC West losses which marked the only losing streak of the season and the first since back-to-back setbacks to, coincidentally, San Francisco and Seattle last October.
Share Tweet Share
Arizona Cardinals