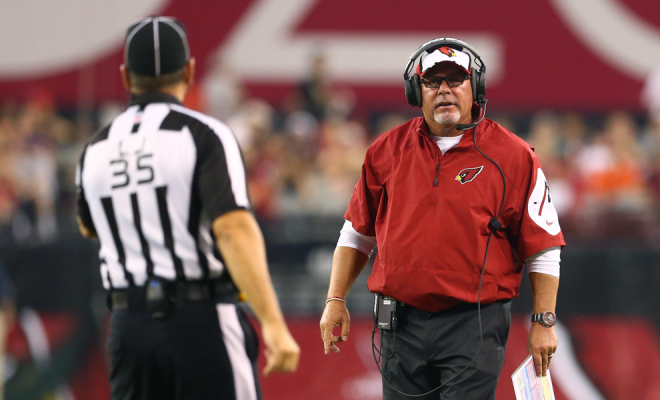 As many expected following their blowout loss to the Seattle Seahawks just over a week ago in Glendale the 11-win Arizona Cardinals will be hitting the road and heading back east this weekend to take on the Carolina Panthers Saturday afternoon in Charlotte.

A somewhat cruel twist of fate for a team who has had to fight tooth-and-nail for everything this season following a laundry list of injuries to key players on offense, defense and special teams. But as the old saying goes–to the victor go the spoils even if the victors didn’t finish the regular season with a winning record.

Yes, the 7-8-1 NFC South Champions will have the luxury of playing at home despite winning four fewer games than Bruce Arians’ squad.

Fair or unfair those are the league’s rules so Arizona, which went 7-1 at University of Phoenix Stadium, are hoping their Super Bowl path starts in Charlotte as it did back in 2008.

“This testifies to what a fraud it is,” SI.com senior NFL writer Peter King told Sports360AZ.com’s Brad Cesmat in a recent interview regarding the rule. “I look at this and I think it’s one of the most unfair things about a league that I always think is a hallmark [who] tries to make it fair for everybody.”

To King, the rule–as voted on by the owners simply doesn’t make sense.

“It’s unfair to take a team that has a bad regular season but is just less bad than everybody else in the division and reward them with a home game,” he explained. “I can’t say enough bad things about it.”

Carolina is the first team to make the playoffs with a losing record since 2010 when the Seattle Seahawks went 7-9.

Arizona has lost two in a row and four of their last six, including Sunday’s regular-season finale to the 49ers in what was Jim Harbaugh’s last game as head coach.