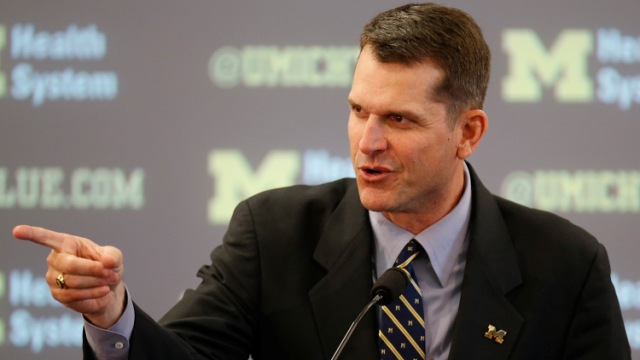 You’re never too old to go back to school.

Jim Harbaugh proved that after his divorce from the San Francisco 49ers which can be explained simply as “irreconcilable differences.”

So Harbaugh packed up his khaki’s and moved on to the midwest. Back to Ann Arbor, Michigan where Wolverines fans are hoping to erase the Brady Hoke era as quickly as possible. The maize and blue deep pockets lured Harbaugh with a seven-year, $35 million deal which included a $2 million signing bonus.

These are the types of contracts the “big fish” of college coaches are now reeling in.

Absolutely according to one college football analyst.

“I think it’s a bad message to be sending,” Pac-12 Network’s Jake Plummer told Sports360AZ.com’s Brad Cesmat in a recent phone interview. “I don’t think anybody’s worth [seven] million as a coach unless they’re going to come in there and be in the national championship game every year.”

In this modern-day era of college football, money talks. The “Power Five” conferences (SEC, Pac-12, Big 10, Big 12, ACC) collect millions each year from lucrative television contracts. The hefty paychecks help not only the football program but several other facets of the athletic department–like women’s and Olympic sports which generate little or no revenue.

Plummer sees an inequality in the current pecking order.

“The college athlete continues to just get by barely with the amount of money and scholarships,” he explained to Cesmat. “I know there has been some changes and some talk of allowing a little more compensation…that’s the nature of the game. I think it’s going to keep getting worse and worse.”

He believes people soon forget the universities are about higher education, not football. Harbaugh’s hefty contract being a perfect example.

“Michigan’s desperate,” he said. “They’re bringing back one of their former players. He’s done a great job at Stanford and with the 49ers. [He] has a great track record…but I don’t like the amount.”

Saban is the highest paid coach at over $7 million annually.