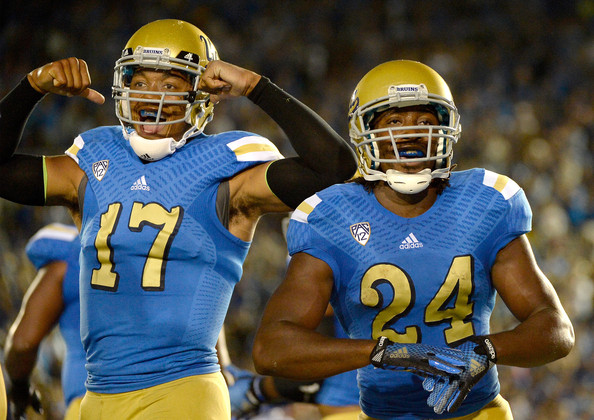 Now that the 2014-15 bowl season is officially complete with only Monday’s National Championship remaining on the schedule let’s focus on a handful of former Arizona prep players who shined over the past couple weeks.

Kyle Allen Texas A&M Quarterback (Desert Mountain): took over for embattled sophomore Kenny Hill on November 1st and never looked back, capping the year leading the Aggies to a wild 45-37 win over West Virginia in the Liberty Bowl on December 29th. The true freshman was 22-35 for 294 yards, threw four touchdowns and added one on the ground. He was named the game MVP. For the year he completed 61% of his throws with 16 touchdowns and seven interceptions.

D.J. Foster ASU Running Back (Saguaro): a steady force for the Sun Devils all season, the junior multi-purpose star in Mike Norvell’s offense led ASU in rushing (79 yards on 11 carries) and was second in receiving yards (42) as ASU beat Duke in the Sun Bowl. Foster rolled up close to 1,800 yards and scored 12 times for the 10-3 Devils. Last week he announced he will return to Tempe for his senior season.

Brett Hundley UCLA Quarterback (Chandler): tallied 232 total yards and three touchdowns (two rushing, one throwing) as the Bruins held off a furious late rally and defeated Kansas State in the Alamo Bowl Friday night. The junior, who already announced he’s forgoing his senior season in Westwood and will enter the NFL draft, kept the Wildcats off-balance as the Bruins raced out to a 31-6 halftime lead. The 6’3, 227-pounder threw for 22 touchdowns with just five interceptions this season. He’s regarded by many as being a top 5o prospect and third-highest quarterback behind Oregon’s Marcus Mariota and Florida State’s Jameis Winston on many mock draft boards.

Andrus Peat Stanford Offensive Tackle (Corona del Sol): started at left tackle for the past two seasons in David Shaw’s system. Helped Stanford’s balanced attack (208 passing yards, 206 rushing) as the Cardinal stormed past overmatched Maryland 45-21 in the Foster Farms Bowl on December 30th. Various reports say the 6’7, 315-pounder will enter the NFL draft where he’s expected to be a first-round pick. This fall Peat won the Morris Trophy, given to the Pac-12’s most outstanding offensive lineman.

Paul Perkins UCLA Running Back (Chandler): Hundley’s backfield mate dating back to their days as Wolves had just under 200 yards on 20 carries in the win over K-State and was named the game’s Offensive MVP. He led the Pac-12 in rushing in 2014. Perkins has 4.48 speed and is the son of former ASU star and NFL running back Bruce Perkins.