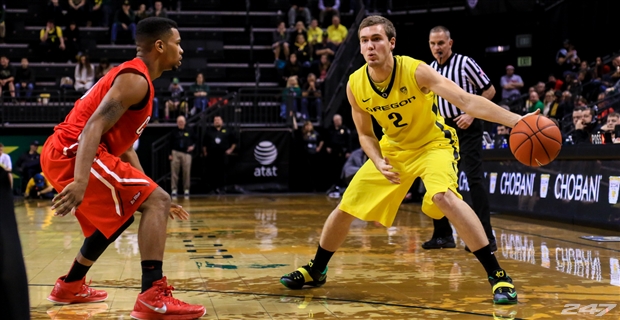 Casey Benson is like most college freshman away from home for the first time.

Adjusting from the desert heat to the colder, wetter weather of the northwest.

Adjusting to the rigors of a full class load.

Adjusting from being “the guy” for longtime power Corona del Sol to more of a role player for the Oregon Ducks basketball team. To this point the 2014 Arizona Gatorade Player of the Year is doing just fine.

“Whatever my role is I’ll accept it for sure,” Benson told Sports360AZ.com in a phone interview earlier this week. “It’s been great.”

The 6’3 left-hander, whose game has been compared to Steve Nash, recently stepped into head coach Dana Altman’s starting lineup and performed well averaging over 25 minutes a game and ranking second in assists. He scored eight points in the Ducks loss to seventh-ranked Arizona Thursday night.

“It was nice to get into that rhythm,” Benson explained. “It’s been great being able to come in and start and get into the flow of the game.”

He’s also been getting some helpful hints and reminders from Altman as he continues to grow his game at the college level.

“One thing that he’s always on me about is being vocal every day in practice and in the games,” he said. “Always be vocal is something I’ve had to continue to work on. Being a point guard that’s what you have to do…be a leader.”

After leading Corona to three consecutive Division I State Championships he still keeps close tabs on the Aztecs.

“I’ll always continue to follow them…hopefully they go for the four-peat and keep the winning going.”

Winning is the only thing Benson knows and despite the loss to UofA, the Quack Attack is off to an 11-4 start.

He’ll get a shot against his hometown team when ASU invades Eugene on Saturday.