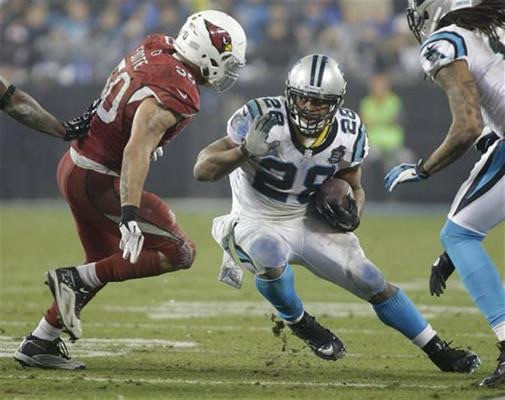 That Cardinals exciting run in 2014, which included them matching a franchise best 11 regular season wins, came to a disappointing end in round one of the playoffs. The Carolina Panthers eliminated the Cardinals Saturday 27-16 in Charlotte. Here are five things we learned.

The Cardinals anemic offense averaged 2 yards per play. They finished with just 78 yards of offense. The worst in playoff history.

The defense had five penalties, all of them in the secondary

Cam Newton was not sacked once

The two teams didn’t look crisp at all both teams had three turnovers and a number of penalties. The Cardinals had 38 yards in penalties.

The Butler didn’t do it…

Aside from the Carson Palmer, losing punter Dave Zastudil in October to a groin injury really hurt the team. Punter Drew Butler did the Cardinals no favors Saturday averaging just per punt. The special teams were anything but “special”. Ted Ginn fumbled a kick-off in the third quarter that led to the knockout punch.

What we hadn’t seen from the Cardinals the last few weeks is their ability on defense to force turnovers. The Cardinals were finally able to do so forcing three on the day which led to two (all) of the Cardinals scores. Normally that is a recipe for success in a game at this level. But the offense’s complete inability to move the ball when not given the ball in great field position after a turnover was the deterrent. Meanwhile the Panthers took advantage of the Cardinals only turnover which was the back breaking aforementioned Ginn fumble which gave the Panthers their first lead of the second half.

Something that used to be one of the biggest, if not the biggest strength of the 2014 Cardinals. Over the last three games, it all came apart. Between running backs and running quarterbacks, they allowed 267, 206 and 188 in three consecutive weeks to the Seahawks, 49ers and then Panthers. Some could say that it was a result of the defense being on the field too long in the first two games and maybe that was the case, but Jonathan Stewart had more rushing yards (70) than the Cardinals offense had total (65) in the first half. Have trouble believing the defense was gassed in the first half of this one.

In what was likely his final game in a Arizona Cardinal uniform, Larry Fitzgerald barely caused a ripple. The 11 year veteran has a $23.6 million cap number for the 2015 season. The salary cap will be around $141 million. No way can the Cardinals tie up that much salary in one player, no matter how popular he is.

Linebacker Larry Foote was the heart and soul of the Cardinal defense in 2014. Saturday was his 17th career playoff game and likely his last.

Defensive coordinator Todd Bowles did his job in Arizona. The Cardinals defense finished 2014 allowing just 18 points per game. Bowles is atop the list of several teams in search of their next head coach. It would be an absolute surprise if Bowles is back with Arians next season.