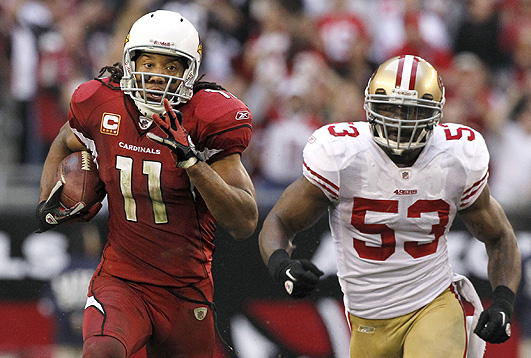 Now the only question remains is will he finish what he started here in the desert?

It headlines a number of key questions entering the off-season after Arizona was eliminated from their quest to be the first host team to reach the Super Bowl. The Cards reached double-digit wins for the first time since the early 70’s but many believe the eight-time Pro-Bowler could have played his last game in Arizona.

“About two months ago I was talking to Larry,” King told Sports360AZ.com’s Brad Cesmat. “He said, ‘look the one thing we all know is that I’m not going to be playing for my cap number as it exists now in 2015. I’m well aware of that, the Cardinals are well aware of that.'”

“He was absolutely adamant that he could get a deal done with Arizona and that he could stay…my gut feeling is I think he’s going to be realistic…he’s going to look at the landscape and he’s going to say at the end of the day, ‘I really want to stay in Arizona so let’s make a contract that makes sense to both sides.'”

Unless Arizona opts to trade or release him in the next couple months Fitzgerald will bank an $8 million roster bonus, further hurting their cap number as they attempt to address need areas in the draft and free-agency. It becomes a delicate situation, balancing what Fitzgerald has meant to the franchise to his current role towards the back of the pecking order in Bruce Arians’ offense. He is presently owed $23.6 million next season.

Fitzgerald has naturally been linked to his home state Minnesota Vikings, as well as the perennial title contenders New England Patriots. Kings feels Fitz won’t take a steep pay cut to play for Bill Belichick who, as history has shown, won’t break the bank for veteran receivers.

“The only way Larry Fitzgerald, in my mind, would end up in New England is if he took half of what he could get somewhere else. That’s just my feeling.”