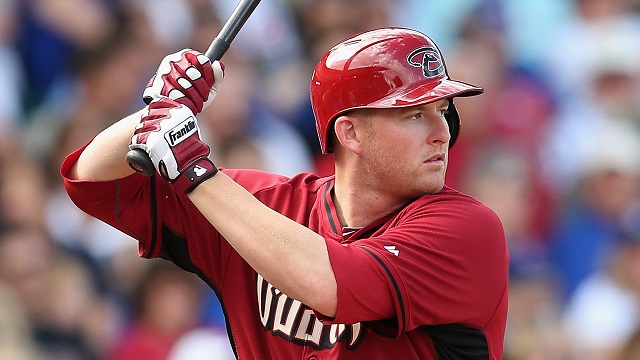 After playing less than a full season with the Arizona Diamondbacks, 134 games to be exact, Mark Trumbo has been traded to the Seattle Mariners.

The Diamondbacks outfield is stacked with A.J. Pollock, Ender Inciarte and David Peralta while needing a place to put the hot bat of Yasmany Tomás into the lineup with third baseman Jake Lamb set to return from the DL in the coming days.

The Diamondbacks under Kevin Towers traded their then top prospect, Tyler Skaggs, to the Angels to acquire Trumbo who had a disappointing 2014. But now healthy, stepped up his game in 2015 hitting .259 with nine home runs and 23 RBI in 46 games.

The Diamondbacks also traded starting pitcher Vidal Nuño whom they acquired before the trade deadline last season in exchange for Brandon McCarthy.

Castillo instantly adds depth to the catcher spot which has been crushed with injuries this season first with Oscar Hernandez needing surgery on his hand to remove his hamate bone and then Tuffy Gosewisch who last week tore his ACL and is done for the season. The 28 year old Castillo had spent his entire career to this point with the Chicago Cubs before joining Seattle this season where he has been the back-up for Mike Zunino. He has appeared in six games in 2015 hitting just .179 with two RBI. He will join Jerrod Saltalamacchia behind the plate.

Jack Reinheimer is a 22 year old shortstop prospect who was drafted out of college at East Carolina in the fifth round in 2013. Via MiLB.com, “He can play short, he can run, he can hit, he’s a nice player,” Mariners scouting director Tom McNamara said of Reinheimer after the 2013 Draft. “We spent a lot of time watching him in the summer, and again, we were happy he was there when we picked.” He is hitting .277 with a home run, 14 RBI and 12 stolen bases in Double-A this season. MiLB has him as the Mariners 14th ranked prospect in 2015.

Gabby Guerrero signed by the Mariners as a non-drafted free agent on Jan. 11, 2011 out of the Dominican Republic and is best known as the nephew of baseball great, Vladimir Guerrero. The 21 year old right fielder is 6-3, 190 pounds and since joining the Seattle organization in 2011, has hit 40 home runs, drove in 247 runs and has 41 stolen bases in 429 games played. MiLB has Gabby as the Mariners fifth ranked prospect in 2015.

The writing was on the wall before the season began with Trumbo being the player that could be the odd one out for the Diamondbacks in the outfield as outside of A.J. Pollock, who should not be traded, Trumbo might be the most valuable piece to deal and get assets in return. Considering the Diamondbacks were able to land two top-20 prospects and depth at the catcher spot for him, that could be proven to be true.

Pressure now will be on Peralta, Tomas and when he returns, Lamb to provide some protection for Paul Goldschmidt in that cleanup role. A role that Trumbo started off doing well this season but struggled with of late as he was hitting further down in the order or at times, up in the two-hole to shake things up.

The opportunity for prospect Peter O’Brien to be called up to add some pop to the lineup like Trumbo is capable of could also be an option in the near future. He has been the news of late as someone who has had reps at catcher this season despite fundamental throwing issues and has apparently stated he wants to spend most of his time in the outfield. His versatility to play multiple positions paired with his power numbers (12 HRs, 47 RBI in 49 games) could warrant a call-up sooner rather than later after this trade.