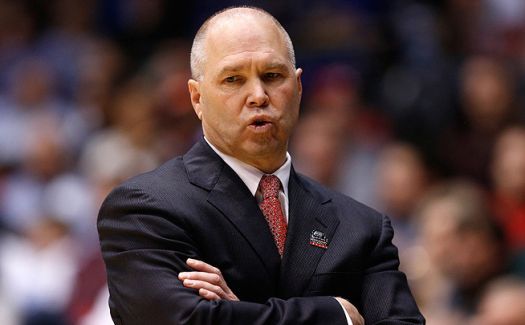 Grand Canyon University has said their hope is that their basketball program could mirror the success of West Coast Conference Members Saint Mary’s and Gonzaga. Both of those schools have gained national notoriety and sustained success despite not having a football program.

Saint Mary’s Head Basketball Coach Randy Bennett is very familiar with the basketball scene in Arizona. He played some of his college ball at Mesa Community College where his father was a longtime coach. Bennett just completed his 14th season with the Gaels and knows where GCU currently stands and is familiar with their program and believes they are on the right track.

“I know Dan [Majerle] and one of my close friends and former assistants, a guy I worked with is Todd Lee (GCU’s Associate Head Coach) and they are right on pace,” Bennett told Sports360AZ on Thursday. “I think these first years when they’re not eligible for the NCAA Tournament are tricky ones to get through but they are doing everything they need to be doing to be headed in the right direction.”

“Grand Canyon has great tradition in basketball,” he added “I think their sitting on a gem right there and I think they’ve done a tremendous job to build the arena they have, to get sell out crowds, and the Phoenix kids, the guys who want to stay home and I think a lot of them do, will end up going there.”

Bennett mentions that steps that GCU has made early on in this process, such as their arena for example, will pay huge dividends down the road to possibly reach success faster than he did with Saint Mary’s.

It has been rumored that GCU could move to the West Coast Conference and join Saint Mary’s as well as Gonzaga in what has become one of the more exciting college basketball conferences in the nation. A move that could be great for long term for the Lopes’ program and a move Bennett could be mutually attractive for their league.

“I think maybe one day they could end up in this league,” he mentioned.  “They’d be a good fit for our league and a good media market for our league to be in. So I think it’s only a matter of time. They need to fight through these years and then when they are eligible for the post season as far as NIT and NCAA, then I think it’s going to happen.”