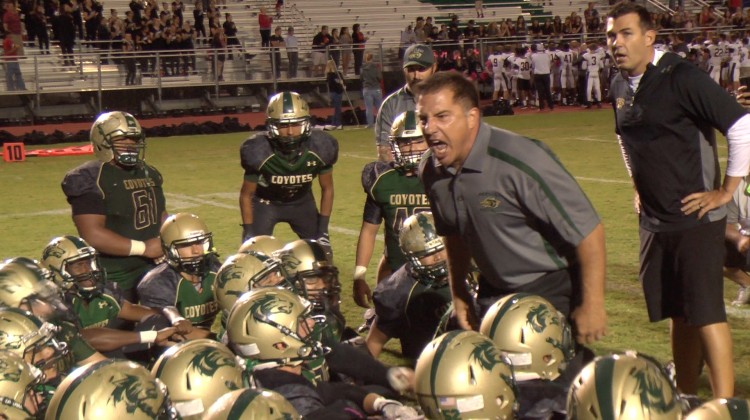 It’s time to pull the pads a little tighter and buckle up the chin straps as the prep playoffs ramp up next weekend. With the brackets out it’s time to explore some angles and how perception isn’t always reality in the world of Arizona high school football.

1. Is Skyline ready to take the next step? They made the playoffs the last two seasons in Division I before having their post-season road trip break down on Arizona Avenue with losses to Chandler two years ago and Hamilton last fall. Now Angelo Paffumi’s team sits atop the Division II brackets at 10-0. Nearly half of their wins this season were by 10 points or less and Paffumi even hinted the Coyotes aren’t world-beaters. “We’re as good as every team we’ve played but we’re as bad as every team we’ve played,” Paffumi said after their hard-fought win over Williams Field. “We have a very slim margin of error.” Skyline opens at home against Tucson Sahuaro and could get a rematch with sectional rival Mesa in the second round.

2. Pointe Taken From the moment senior Jack Smith took over as Mountain Pointe’s starting quarterback the only thing he’s talked about is winning a state championship. Now the second season begins for the #2 Pride. Some believe Norris Vaughan’s team, despite their unbeaten regular season, has played third fiddle all year behind Chandler and Hamilton. The Pride didn’t play either team during the season but would meet Hamilton in the semi-finals on November 20th.

3. ‘Cat Tracks So Saguaro’s a seventh-seed, huh? Don’t think for a second battle-tested head coach Jason Mohns won’t be reminding his team all post-season the power point people seem to think there are six “better” teams. The Sabercats only two losses this season were to Division I playoff teams Centennial and Pinnacle. Hard to think the balanced defending champs won’t make a deep run again behind Byron Murphy, the Lyles’ brothers and a big, talented offensive line. Key will be staying healthy as depth has been a concern.

4. No Respect Mohns likely isn’t the only coach scratching his head this weekend. David Inness’ Northwest Christian Crusaders finished 8-2 but drew the 8th-seed in Division IV and will take on Tucson Flowing Wells in the first round. Northwest ended the season with a two-game losing streak but half the roster are seniors, including David’s son Drew who threw for 29 touchdowns and nearly 2,000 yards during the regular season. Bad news is with an opening round win they’d likely see top-seeded Yuma Catholic who beat them 27-7 on October 23rd.

5. Mountain High eastern Arizona will be well represented with Show Low (#2), Snowflake (#5), Blue Ridge (#11) and Payson (#14) all punching their post-season ticket. Long-time rivals Blue Ridge and Show Low could meet in the semi-finals in what could be a payback game for the Yellow Jackets who were blown out by Randy Ricedorff’s team 39-3 earlier this year.