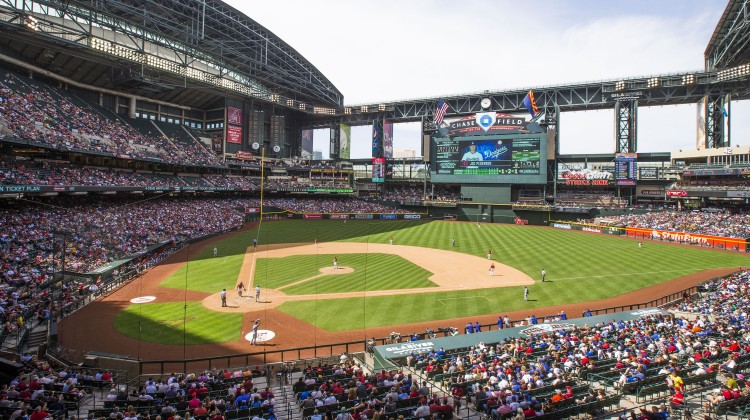 The Arizona Diamondbacks are looking to the heavens and asking for some relief from the baseball gods and no, it has nothing to do with the brutal summer temperatures here in the Valley.

For whatever reason, Chase Field continues to be Kryptonite for the local nine.

The D-backs continue to flourish on the road but can’t solve the mystery of 401 East Jefferson Street.

“If we could get [Major League Baseball] to allow us to wear our road uniforms at home that would help,” Diamondbacks President/CEO Derrick Hall quipped in a recent phone interview with Sports360AZ.com. “It’s unreal.”

What’s even more unreal is to think about the post-season position Arizona could be in if they were merely below-average to average at home. Despite key injuries to mainstays like A.J. Pollock, Paul Goldschmidt’s sluggish start at the plate and a myriad of inconsistencies in the starting the rotation, the D-backs remain in striking distance of a National League wildcard birth.

“We have got to turn it around at Chase Field,” Hall said. “It has been very discouraging. I can’t put my finger on it.”

Entering Wednesday’s game against the Phillies only the Braves (11) had fewer home victories than the D-backs 13.

“It is head-scratching how they’re performing at Chase Field,” ESPN baseball insider Pedro Gomez told Sports360AZ.com. “There really is no answer for it. It’s mind-boggling to [manager Chip Hale] that they’re not playing better ball at home because when you have the fifth-best road record usually you’re a better team…the Diamondbacks just aren’t there yet.”

It’s safe to say the D-backs won’t be getting “there” until the home cookin’ tastes a whole lot better.