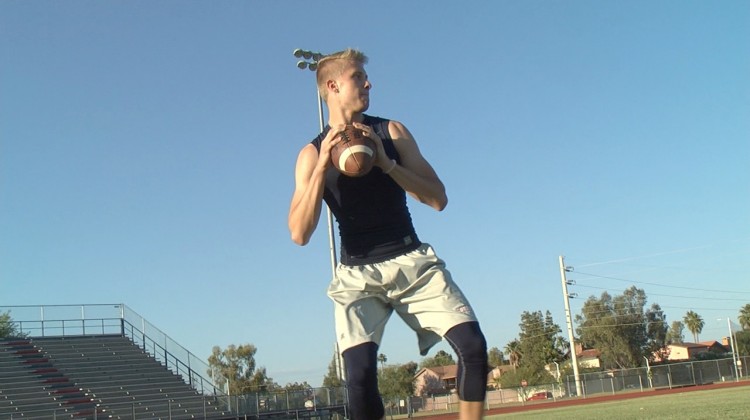 It’s that time of the year.

The last month or so before high school football returns under the Friday night lights.

We’re all – players, coaches, parents and, of course, writers – excited for the season to be upon us.

Players and coaches will spend the time between now and then at summer camps before returning to school for the start of classes and final preparations for the season opener.

Parents will spend the time continuing booster club responsibilities, getting their team swag ready for wear, and awaiting the renewal of their annual Friday night friendships.

Well, we look forward to the season with a myriad of lists:  Top players, top games, top venues and even top food truck selections.

So, I’ve come up with my own list as I look forward to the upcoming season. It includes players that I am making a point to see in person before the season’s end.

This senior wideout combines sticky hands – sometimes only one – with tremendous body control and should rank at or near the top of any list of the best receivers in the state, in my opinion. Fine led the Black Hawks last season with 53 receptions for 953 yards and 13 touchdowns. His two biggest games came against his team’s biggest rivals, finishing with 164 and 149 receiving yards against Queen Creek and Higley, respectively. He totaled more than 100 yards against four other opponents, ending the season with six 100-yard receiving games.

Another senior receiver that I believe has been slightly overlooked when talking about the top receivers in Arizona. As a junior, Russell ranked sixth in the state last year, regardless of division, with 1214 receiving yards in addition to having 19 touchdown receptions, the most in the Cougars’ section. He finished with seven 100-yard receiving games, including a season-high 183 yards and four touchdowns in a 56 – 14 win against Amphitheater on 9/11. With the return of QB Brock Hall, a stud himself, and many other offensive starters, Russell could post even bigger numbers this season.

Being named the starting running back at rushing-powerhouse Queen Creek might be the equivalent of being named the starting QB for the Dallas Cowboys. Koester follows Matt Guida, Weston Barlow and Gavin Danielson as the next big-time rusher for the Bulldogs. The senior tailback played sparingly, albeit productive, during the first six games of last season before an injury ended Danielson’s high school career, making Koester the starter for the remainder of year. He responded with 34 carries and 117 yards in his first varsity start and ended the season with nearly 600 yards rushing and four touchdowns.

A three-year varsity player and a three-sport athlete at Combs, Johnson has waited his turn to take over the reins of the Coyotes’ offense. A coach’s son, he played different positions the last two seasons just to get playing time while serving as the backup QB. He led the Yotes to their biggest win of the year last season, directing a game-winning drive at Payson that ended with a last-second touchdown pass. Now he’ll lead a newly installed offense under the direction of head coach Jesse Hart, who’s made the switch from calling the defense in previous seasons to calling the offense in 2016.

A sophomore starter a year ago, Thompson is the Broncos’ top returning tackler after finishing with a team-high 93 tackles last season. Additionally, he led the team with nine tackles-for-loss and five sacks. Thompson is a big-time playmaker on a team that needs more like him on both sides of the ball. The junior figures to be one of the team’s leaders under new head coach Cody Collett, who took over the Broncos’ program after the departure of Paul Moro following a winless season.

This senior transfer from Florence High School is one part of the makeover going on at San Tan Foothills, which in addition to the school’s transition to the Florence Unified School District, includes a new coaching staff. Sabercats’ head coach Ritchie Martin has tabbed Herrera as his team’s starter for this season. Playing QB runs in the Herrera family as Danny’s older brother Bobby was a two-year varsity starter at Florence and figures to have passed along a few tips to his younger brother. Herrera will carry a lot of responsibilities as the Sabercats’ starting QB; learning a new offense and providing leadership on and off the field.

Who wouldn’t want to watch one of the best running backs in the state? Jordan, who already has multiple Division I offers, is only a junior and widely considered among the speediest rushers in the state. After scoring 33 TD’s in nine games on the Huskies’ freshman team, Jordan rushed for more than 700 yards and scored seven touchdowns in his first varsity season as a sophomore. The departure of three seniors from a year ago who combined for more than 1,100 rushing yards means more carries, yards and touchdowns for Jordan. He could put together a record season and I want to see at least a part of it.

Vanderjagt’s performance last season, his first at Coronado after transferring from Saguaro, helped the Dons to a three-game improvement from the previous season and their first winning season since 2009. The senior signal-caller threw for nearly 2,200 yards last season with 27 touchdown passes and only eight interceptions while completing more than 60 percent of his passes. With now a season under his belt and in the Dons’ offensive system, Vanderjagt has a chance to surpass last season’s impressive totals, perhaps leading the Dons’ to their first postseason appearance in five seasons.

Don’t let that fact that this four-year varsity starter plays 1A (8-man) football fool you. He would be comparably productive at any level, in my opinion, and that’s why he’s on my bucket list of players to watch this season. Cruz, a three-sport star at Superior and one the school’s best-ever athletes, helped lead the Panthers to the semifinals of the Division 6 state playoffs as a junior. He figures to have his team in the same position, and likely better, this season. Last season, Cruz threw for nearly 1,600 yards and rushed for almost 1,200 more with a combined 39 touchdowns. Opposing defenses game-planned to stop him but couldn’t and it won’t be any easier for teams this year as Cruz tries to lead the Panthers to a state title in his final season.

I’ve heard about this sophomore since covering his older brother Chris for three years at Poston Butte. I heard from people who witnessed Luke play at the youth level that he had a chance to be better than his elder sibling, which is saying something considering Chris was a top-40 player during his high school career and earned a scholarship to the U.S. Air Force Academy. Luke is the unquestioned leader of the Colts’ defense and is a member of a team that features almost exclusively sophomores in addition to a few freshmen. Despite not having a single upperclassman on the roster, the Colts will play a full varsity schedule this season. My familiarity with the Musselman bloodlines makes me believe Luke is up to the challenge and I’m certain he’ll perform up to the hype.