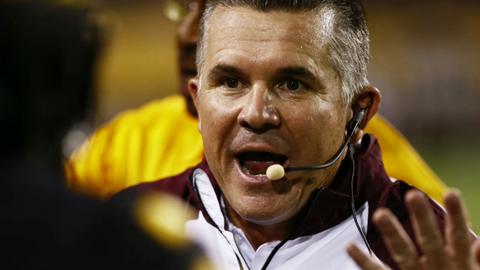 This fall there will be a change at quarterback as outgoing senior Mike Bercovici pursues an NFL career with the San Diego Chargers.

“Team Sparky” is hoping for another change…a change in the number of wins after ASU stumbled to a 6-7 finish. It was Graham’s first losing season in Tempe and an unexpected step back after back-to-back double-digit win seasons.

“We had high hopes going into the season,” former ASU safety Jordan Simone said on ‘The Brad Cesmat Show’ on Sports360AZ.com. “We really truly believed we could go 15-0 and win a national championship. It’s still hard to talk about…it’s fresh on the mind.”

ASU likely won’t go unbeaten this season but Graham’s overall success, coupled with his hard-working staff, have landed a load of in-state talent which arrives not only this fall, but next year, as well. The crown jewel of the 2018 class to this point is Basha High quarterback Ryan Kelley who the Devils flipped from Oregon this past May.

The “buy-in” from these recruits is real and it all starts with the structured, at times rigid Graham.

“I learned so much about character, being smart,” Simone explained. “All the things he talks about every day have been instilled in me and I’ll take that [with me] for the rest of my life. Sometimes you’ll wake up and he’ll be preaching it and you won’t want to hear it but…eventually you start talking it and living it.”

As for who will be behind center when the Devils open their season against NAU on September 3rd, Simone is waiting just like the rest of us.

“They’re all different…I’m really excited to watch fall camp and to see who emerges as the starter and the leader of the team,” he said.

ASU and their fans are certainly hoping that’s the case this fall.