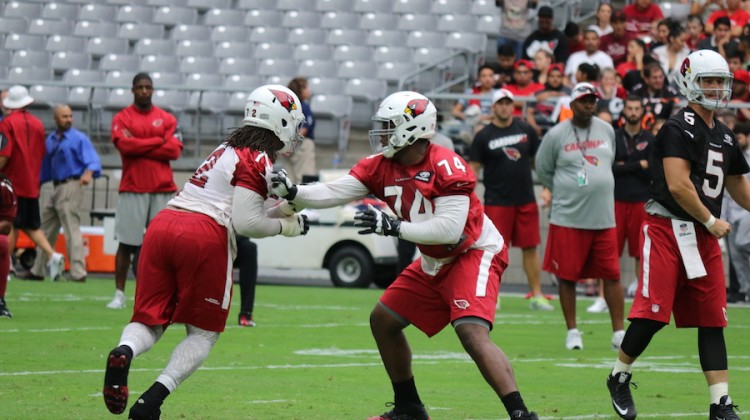 2015 was a tough year for former first round pick D.J. Humphries.

His rookie season saw him inactive in all 16 games not having suited up on game day once. It forced him to have to prove himself each and every week during practice and watch the game from a perspective that quite frankly, he was not used to.

“My Dad was telling me, either you’re going to bust or be a diamond,” Humphries said as the first full day of training camp began. “I busted last year but now I have the chance to make this thing into a diamond so that’s what I’m trying to do.”

Sitting week after week working on the Scout team and watching from the sidelines was something he admits was tough and had a profound internal impact on him.

“You get numb after a while,” Humphries explained. “You soak in the feelings, you go back to Monday and Tuesday, your starting defense is mad at you because you felt that on Sunday and they got to play. Now you got your game day on Wednesday but I am just glad to be out of that S#@! and back on the field.”

This offseason into the start of training camp, Humphries has been slotted in as the teams starting right tackle. No free agents or veterans were brought in to compete for that role and as of now, the team appears to be giving him every opportunity to take that role and run with it.

While the team didn’t bring in a veteran right tackle this summer, they did bring in a right guard to line up along side him this season in former Denver Bronco Evan Mathis. Someone who Humphries is looking at for guidance moving forward.

“Man! He helps a lot,” he said of Mathis. “There was some stuff today that was just looks that I’ve only seen on paper and I get down on the line and I’m like ‘hold on.’ And he’s like ‘nope right here,’ and I’m like ‘ok cool.’ Between him and A.Q. (Shipley), I don’t have to think much. It’s just automatic.”

It is seen from his enthusiasm as well as his body showing he’s putting it all on the line to be the starter this season and doesn’t expect it to just be handed to him. He has slimmed down and added some great muscle and strength since last season and even more so, since he was drafted by the Cardinals.

“I know that was a big part for me on the field,” Humphries explained. “A lot of stuff I don’t have problems with because I am athletic but then have a problem with because I am not as strong. Athleticism was not something I needed to worry about. Getting stronger and bigger and getting more stout was something that was going to help me in the confidence lane in how I feel about myself and physically on the field.”

The whole offseason has been studying and wearing shorts on the practice field. Finally with training camp getting started, the pads can finally come on. Humphries is beyond excited to get that rolling.

“I am almost jitterish I am so excited,” he stated about getting the pads on this fall. “I woke up this morning and I was like dry-heaving. My lungs woke me up and I thought I overslept. I am so anxious, I am excited and I can’t wait.”