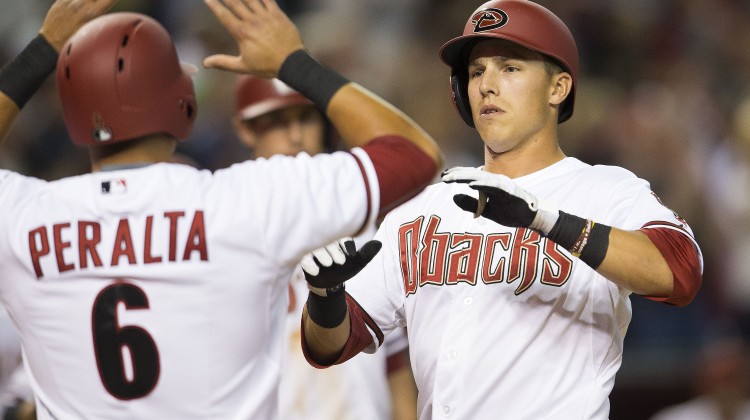 While a lot is being made of the players who have underperformed in 2016 to this point for the Arizona Diamondbacks, little is being made of those who have. Paul Goldschmidt is back hitting over .300, Zack Greinke before injuring his oblique was looking outstanding every fifth day.

Those are the two you would expect to be producing at an all-star level. The one you may not have expected however is third baseman Jake Lamb.

Lamb’s biggest issue going back into his minor league career as well has been staying healthy. He missed time in the minors and in each of his first two seasons at the big league level but when out there healthy every day, he had produced. Knock on wood, Lamb has been injury free in 2016 which has allowed him to grow and settle in at the big league level.

“He’s growing up and maturing and thats the thing,” President and CEO of the Diamondbacks Derrick Hall told Sports360AZ.com. “These guys are still so young and when they start to get some playing time under their belt, you start to see what we saw at the minor league level.”

“Jake is a very talented player,” Hall mentioned. “He has improved at third base, he is showing now that he can hit left handers, we saw what he could do at Coors Field against Logan and that’s what we need.”

Two of the best third baseman in the game, Kris Bryant with the Cubs and Nolan Arenado with the Rockies, are putting up big numbers this season and with good reason are getting a lot of the pub. But sitting right behind the two of them in many hitting categories in the National League including home runs and RBI’s is Lamb. Plus he has done so after not playing every day in the beginning while trying to figure out lefties.

“We need a consistent producer at third base and on the corners like we have with Goldy and he’s been that guy,” explained Hall. “It’s nice to have someone who can bat behind Goldy and put a threat into the opposition’s mind and he’s done just that.”

In the eyes of the Diamondbacks front office, there is nothing more rewarding than seeing some of your top prospects begin to come into their own at the big league level. In 2016, it looks to be Lamb who has done so.

“I am thrilled with the way he’s played,” Hall stated. “He’s one of those players who is a big part of our future. We are starting to see it with a lot of guys. We saw it at the beginning of the season with Brandon Drury and he’s got to make some adjustments now, we saw it with Pollock last year and we look forward to him getting back healthy. But those guys are going to be staples in our lineup and it’s nicer now to see them produce every single day.”