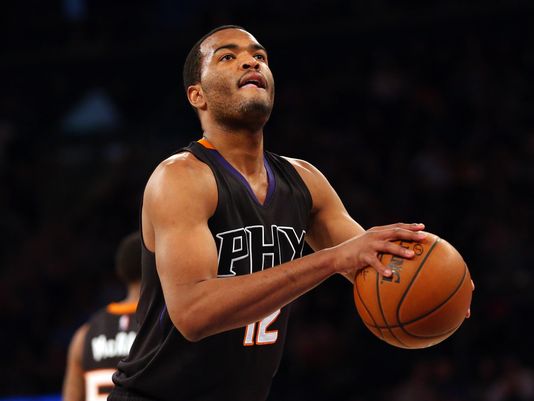 The Phoenix Suns have had an interesting offseason.

When people talk about the Suns this summer, the players you hear brought up are the young guys Devin Booker, Marquese Chriss, Dragan Bender, the slightly older guys in Eric Bledsoe and Brandon Knight and then the old guys in Tyson Chandler and newly re-acquired Jared Dudley and Leandro Barbosa.

At no point from my perspective, have I heard the name T.J. Warren.

I find it interesting that the player who at this time last year in which people were very high on and ready to watch break out is not even being mentioned now. Yes, the 14th overall pick in the 2014 draft missed 35 games last season with a foot injury. That could be the reason since he wasn’t seen much on the court to close out there year.

I posed this question of if Warren is being forgotten in this future Suns core of players to general manager Ryan McDonough.

“I think people, if they sleep on him, will be surprised next year,” he said. “He’s a talented young guy, I think it is easy to forget he is only 22 years old. I think if you compare him to the guys who were his age or even older in this year’s draft, he compares favorably to most of them.”

People forget, the time he did spend on the floor last season was solid considering he started in just four of the 47 games he appeared in. According to basketball-reference, he averaged 23.4 points and 6.7 rebounds while shooting 50 percent from the floor and 40 percent from three per 100 possessions. His offensive rating, which is an estimate of points produced per 100 possessions, was 112 which was second on the team behind Tyson Chandler.

“Last year on the court, you saw him improve his shooting,” McDonough explained. “Especially from the perimeter. He has always been able to score efficiently around the basket, he inherently understands what’s a good shot and what’s not a good shot and just has a knack for getting the ball in the basket.”

Warren attempted just 21 three point shots in his rookie season making just five of them for a 23.8 percent clip. Last season before going down with the foot injury, he made 28 of 70 three pointers for that 40 percent clip.

“Adding the three point shot last year makes him a pretty complete scorer offensively and he will continue to work on his defense and rebounding and other aspects of the game,” McDonough added.

Other than coming off of his first significant injury as a pro, Warren remains a talent that could be an extremely productive piece for the Suns going forward with his skill set and ability to score the ball. While others seem to fail to mention his name about the Suns going forward, McDonough is still very high on what he can bring to this team.

“He’s a basketball junkie, Jared,” McDonough said. “He loves being in the gym, he loves watching games. He’s feeling good, his body looks good, I think he is getting very close to getting fully cleared to play. We’ve just been cautious with him obviously because it is late July and training camp doesn’t start until late september.”

So yes, everything points in the direction of Devin Booker being a star in this league with Eric Bledsoe being the closest to being the team’s immediate All-Star. Fans will pay close attention to the growth of Chriss and Bender and media will head in the direction of Chandler, Dudley and Barbosa for sound bites around the state of the team over the course of the year.

But Warren will be there too and as McDonough mentions, those who forget will ultimately be very surprised.