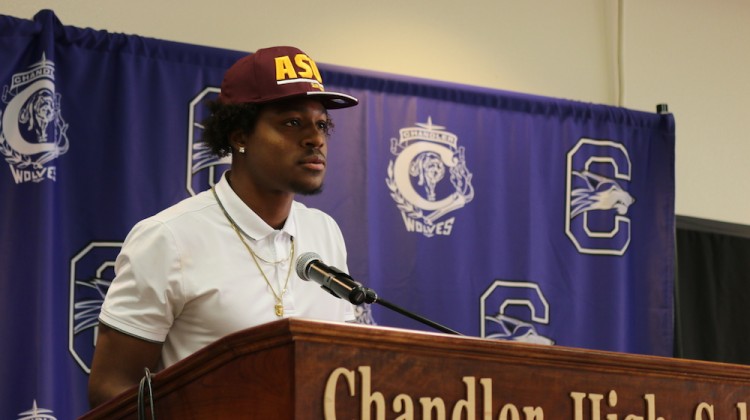 The Sun Devils are looking to bounce back in 2016 with many new faces in the fold starting in key positions. The quarterback battle will be the biggest storyline as fall camp gets started and probably won’t be set in stone right before the July 3rd home opener against NAU. Before then, here are three names to keep an eye out for who could turn some heads over the duration of camp:

N’Keal Harry: It is hard to predict what a freshman will do in their first fall camp and if they will make any impact in their first season with the program. However, Chandler High alum N’Keal Harry is the perfect player at the perfect time for ASU. The Sun Devil wide receiving position still seems a little thin despite Cameron Smith coming back from injury that kept him sidelined all last year and Ellis Jefferson looking as good as ever during spring practice. Tim White will be featured along with Smith and Jefferson in the beginning but Harry has the size, maturity and skill to make an impact right away on the outside and could find himself being an every down player by the time the season rolls around if he can dominate during camp. Robbie Robinson from Virginia is another player who could make an immediate impact as a freshman but at the defensive back position.

Jason Lewis: There was a player last season during fall camp 2015 that you simply could not take your eye off last season at the running back position and his name was not Kalen Ballage or Demario Richard. It was the then, 6-3, 235 pound true freshman Jason Lewis. After taking a redshirt year in 2015, the Devils will turn Lewis loose in 2016. Ballage and Richard will still be the featured backs this season but you know if Lewis makes the impact this camp like he did last year, some packages will be made for him. He is a physically imposing back who is also deceivingly fast and versatile. It is said he can play multiple positions so we will see how Coach Graham and his staff figures out how to keep Lewis on the field as much as possible.

Ray Epps: In his first full season with the Sun Devils after transferring in from Arizona Western, Epps appeared in 12 games for ASU at the tight end position hauling in four catches for 52 yards and a touchdown in 2016. Kody Kohl has been the gut at tight end for Todd Graham. A two-year starter, local product and has played well. Epps’ 6-5, 235 pound frame is hard to ignore. The Indianapolis native is a physical specimen out there with a lot of athleticism and versatility. It is believed that if he continues to improve his blocking, he could make things interesting between him and Kohl even though Kohl has really done nothing to be demoted. He showed flashes last season and if he does so in camp, it could be hard to keep the redshirt junior off the field on Saturdays.