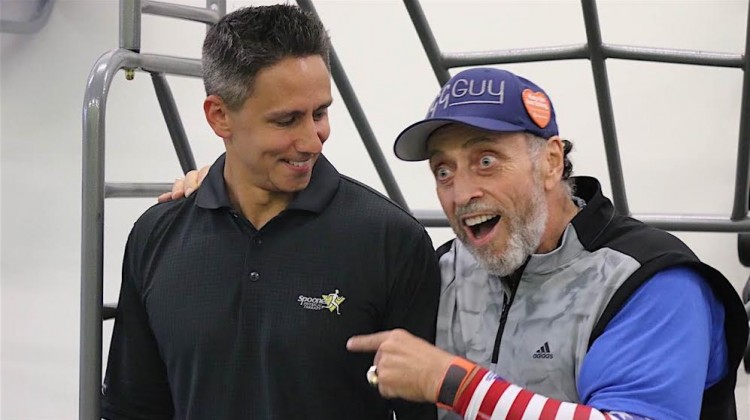 Bursting through the doors at Orangetheory fitness with a wide smile Bendesky isn’t there to mess around.

His focus is quite clear, much like Pink’s lyrics.

“I’ve become an athlete,” 58-year-old Neal Bendesky told Sports360AZ.com as he gears up for his third physical therapy session of the week.

He realized it was time for a change, one that would radically save his life. Today, Bendesky is on track to losing his initial goal of 199 pounds, which he proudly wears in bold letters on his hat “199 Guy.”

With only 12 more pounds to go, the Vice President of Corporate Sales and Development for the Arizona Rattlers brought Sports360AZ.com along to see what an average day looks like for him.

Looking back on hard times we asked Bendesky what led him to make this 360 degree change to his lifestyle.

He says it was a combination of things, including a three-year-old boy Max, his family, friends and well over 20 years spent in the sports industry all led him to make the change.

Bendesky has left quite a mark on the sports industry. He worked in Miami for 23 years and served as Vice President of the Heat and the Marlins. After working with the University of Miami he took a sports marketing job at the University of South Dakota. Now he’s happy to call Phoenix his home and the ultra-successful Rattlers his favorite team.

While working with Arizona’s professional indoor football team, Bendesky realized that if he was going to stand for sports and wellness, he needed to represent himself better.

“199 Guy”, as he calls himself, decided to join OrangeTheory Fitness in South Chandler. Bendesky recalls one day in particular that really changed his life.

Max walked in with his mother Andrea and said to Bendesky that he looked like Santa Claus. Initially Bendesky didn’t know how to respond but decided to play in on the moment and chuckled, “ho, ho, ho.”

It was in this moment Bendesky decided to take his goals more seriously.

“Little things in life serve as motivators. We just have to have our eyes open and be willing to listen when others are trying to help,” he says.

Now, the Rattlers team calls him, “The Incredible Shrinking Man.”

According to Bendesky, the key was to change his self-esteem and commitment to nutrition.

His Nutritionist, Jodi DePriest and Physical Therapist, Garrett Early are just a few of his many supporters.

Bendesky says he lost the first 69 pounds through counting calories.

“I was scared to go to bed and not knowing whether I’d wake up the next day,” He said of his life months ago. “I felt uncomfortable to go to the bathroom.”

Like any athlete working towards a goal, it’s all about determination. Bendesky hasn’t missed a day in five months.

The process hasn’t always be easy.  A recent medical setback caused Bendesky to have two stents put into his 98% blocked artery.

“I’m thankful for the fact that I wouldn’t be here with the goal of inspiring others if I hadn’t started the workout program in October,” Bendesky explained. “This is just part of my comeback.”

The comeback never stops he said, “It’s never too late.”

Athletes don’t always play on a field or dribble a ball on a court. Some athletes spend all their time working in the gym. All beat with the same heart of determination to reach their goal. Bendesky saved his life by becoming an athlete at OTF. He breathes truth into the saying, “anything is possible.”

If he can do it so can you.

Inspiring others is the only way Neal Bendesky knows how to live.