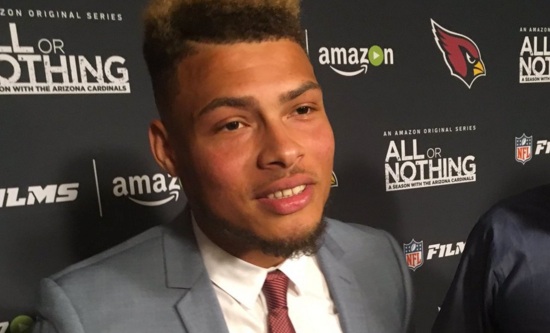 In many ways you couldn’t have scripted a better story than Tyrann Mathieu’s.

An electric game-changer at LSU whose fall from glory was as quick as his rise. The once “risky” pick of the Arizona Cardinals just cashed in on a new $21.25 million guaranteed deal despite two torn ACL’s, including one late last season which damaged the Cards Super Bowl hopes. Despite the setback he was named First-Team All-Pro and selected to the 2016 Pro Bowl.

His journey has captivated the league and football fans everywhere but few respect the player on the field and more importantly the person off it, like his Cardinal teammates.

“Not only can he play but he’s a guy I want in my fox hole,” long-time Cardinals defensive tackle Calais Campbell said after a recent practice. “He’s a guy I respect. He’s an unbelievable standup guy.”

People don’t really want you to be yourself. Trust me

The Badger is the perfect teammate in many ways. Loyal to an organization and head coach who always believed in him. A player who leaves it all on the field, while not be worried about holding others or himself accountable when circumstances tend to get sideways.

“He’s a little guy but he’s fiery,” Campbell said with a wide smile. “I got a lot respect for him. When he speaks, everybody listens. That’s because they see what he’s done on the field and his work ethic.”

Sometimes these stories can happy endings after all.