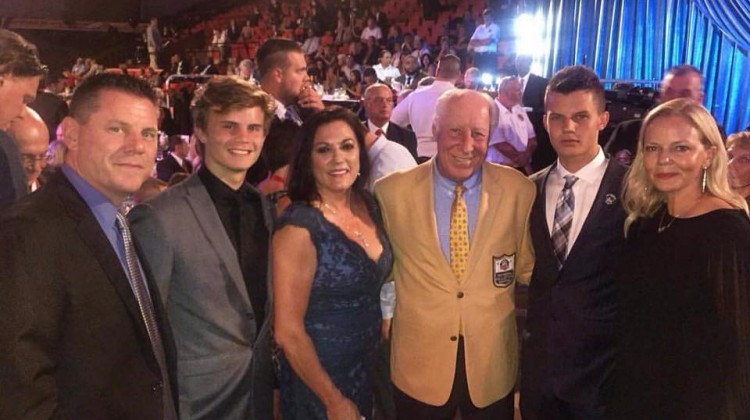 Most high school students spent their last Saturday night of summer hanging out with friends and getting in one more late night before the school year kicks off.

The Moyes twins helped induct their grandfather, Ken Stabler, into the Pro Football Hall of Fame. Jack and Justin, who both play on the Chaparral varsity football team, joined fellow Raider great and hall-of-famer Fred Biletnikoff to unveil their late grandfather’s bust.

Ken Stabler's grandsons and Fred Biletnikoff presented No. 12 for enshrinement.

An emotional, and long-awaited, night for the Moyes family, Justin capped the unveiling off by kissing the bust. Stabler had a profound effect on his family and helped the twins fall in love with the game of football. After he passed away on July 5, 2015, the Chaparral football program honored Stabler at a home game last September.

“The Snake” is the Raiders franchise leader in passing yards and passing touchdowns and led the Silver and Black to five straight AFC championship games from 1973-1978, winning the Super Bowl in 1976. He held a 96-49-1 record as a starter.

The Moyes brothers were able to share their journey with their Chaparral teammates. Firebirds quarterback Grayson Barry and linebacker Parker Walton joined the twins on their trip to Canton.

"There's a snake in the hall"?

With The Snake now in the hall, Justin and Jack look to their senior season, which begins August 26th at Horizon High School.