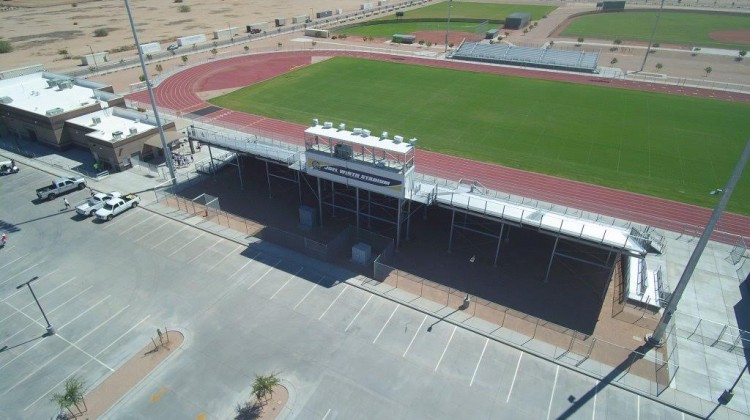 They say you never get a second chance to make a first impression.

Well, Casteel High School is hoping history repeats itself Friday night in far east Valley as the Colts try to build off their 58-0 varsity debut win at Globe.

Now they’ll have a chance to do in front of their home crowd when they make more history this weekend hosting Payson in the school’s first varsity home football game.

Marcus Williams, who is the Athletic Director of the Chandler School District, said the varsity addition means a great deal to himself, as well as the district. Varsity level coaches were hired when first opening Casteel, as they knew in the future they envisioned Casteel to have all sports at a varsity level.

“Stowers has done a significant job of creating that culture, and making (students) feel like they’re in a varsity caliber program,” Williams said, “The whole things to me is special, making all of those decisions from building the school to hiring the staff.”

Never get outworked is the motto that head coach Spencer Stowers repeats again and again to his players. Starting a successful Varsity program from ground up has been a challenge but not out of reach for Stowers.

Despite the lack of varsity history, Stowers said as a team they expected a positive outcome for their first game.

He said he felt the team was prepared and executed well at Globe.

“On paper, all of our opponents will be older,” Stowers said reflecting on his freshman and sophomore heavy roster. “We are a platooned team on offense and defense and believe that our tempo and conditioning will ware teams down.”

Preparation for the program’s first varsity season began eight months ago in the weight room.

During the summer, the team competed against Desert Edge and Chandler, which further prepared them to take on other seasoned teams in the fall. Stowers wanted to put his team up against some of the best players in the area.

As the football season is underway, he said the community support has been unbelievable. In two months, the program was able to purchase a new scoreboard thanks to 12 nearby sponsors.

“The atmosphere is exciting,” Stowers said. “Football is the first season out the gate and we have a full understanding that the football program is the heart beat of school culture.”

Stowers is excited to build the program from the ground up.

“On paper, we aren’t the heaviest and fastest team but we pride ourselves in our physical and mental strength,” Stowers explained.  “The 120 athletes that currently believe in the ‘colt way’ will see their hard work pay off for years to come and be an example for those who follow.”