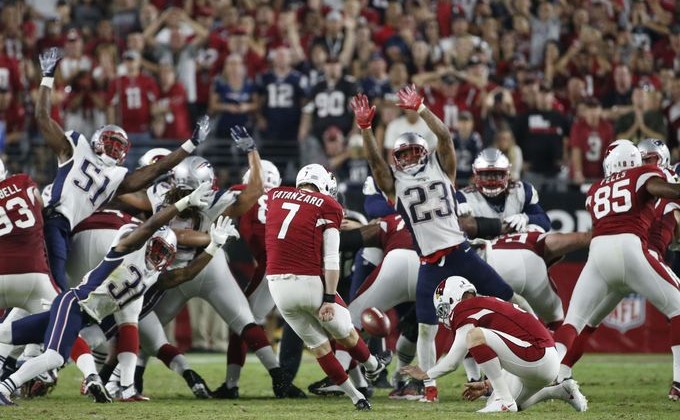 Going into week one of the 2016 NFL season, the Arizona Cardinals had not lost at home in the month of September since 2009. The clock reset on that streak on Sunday night in prime time as the Cardinals lost to the New England Patriots by the final of 23-21.

Here are five things we learned:

0-1: There was no Tom Brady. There was no Rob Gronkowski. But there was Bill Belichick for the Patriots which is still enough to lead a team to a big win on the road. The Patriots came in and set the tone. On offense, they moved the ball well with back-up quarterback Jimmy Garoppolo. He targeted Julian Edelman early and often and finished with seven catches on seven targets.

On defense, the Patriots dominated the line of scrimmage. The Cardinals offensive line was a significant reason for the slow start. There were times on run plays were an offensive lineman was pushed out of position or his lane. Pockets collapsed on Carson Palmer both on the inside and outside.

And special teams, which was extremely poor in the preseason, looked bad on week one as Andre Ellington was able to do nothing by way of return on kickoffs averaging 15.3 yards per return with his long going for 21 yards. The team’s best opening field position on the night would have been as a result of touchbacks almost every time. Drew Butler’s punt average was a dismal 36 yards per punt on his five punts. Finally, the game ended with a low Kameron Canaday snap and a potential game winning field goal from Chandler Catanzaro go wide left.

“We really didn’t play well in any phase of the game,” stated head coach Bruce Arians after the game, although we did have a chance to win at the end. We didn’t execute our snap, hold and kick to win the game. That all starts with me, starts at the top. We were obviously not ready to play, they outplayed us and we will learn from it.“

Worrisome Williams: Brandon Williams had a tough debut. The rookie in his first NFL game was on the wrong end of some big plays in the pass game. Two of which were big plays to Patriots receiver Chris Hogan. One went for a score and the other led to a score. It was known that Williams was going to be targeted opposite Patrick Peterson and that there would be some bumps in the road. But can the Cardinals be ok with that if it means points being given up and plays being made?

Turning Point turnovers: While the performance from the Arizona Cardinals was anything but perfect, they proved to be very opportunistic which is an important quality for a team with the expectations and goals they have for this season. The Patriots turned the ball over two times in the game. The two came on fumbles from Jimmy Garoppolo on a strip sack by Markus Golden in the first half and then a fumble by LaGarrette Blount in the third quarter. Both led to the Cardinals first two scores of the game which came with a short field. On the other token, the Cardinals offense was only able to put together a scoring drive with normal field position once and it was because of a remarkable 45-yard run. The offense just could not get into a solid rhythm that led to long, successful drives.

Larry Legend: So is the final run for Larry Fitzgerald? Reports indicate it could be. If it is, boy it got off the a great start. The veteran had a big season opener with eight catches for 81 yards and two touchdowns. He put the team on his back making big plays in the second half but it just wasn’t enough to get the win.

As a result of the game, Fitz has a catch in 180 straight games. He needed 17 yards receiving to pass Torry Holt (13,382) for 14th place on the NFL’s all-time receiving yardage list. He did that in his first three receptions on the night. He also hauled in his 99th and 100th career touchdown receptions tying him with Hall of Famers Tim Brown & Steve Largent for eighth all-time.

Tony’s no Phony: Tony Jefferson had a remarkable game for the Cardinals. All night long he made plays when he was brought down into the box at the safety position to get after the quarterback or attack the run in the backfield. He finished the game with a team-high 10 tackles, two tackles for loss which netted negative seven yards and a quarterback hit. It seems as if with the departure of Rashad Johnson to Tennessee this offseason, Tyrann Mathieu is spending more time in the back of the secondary roaming the field and they are sending Jefferson into the box. Mathieu spent more time in that role Jefferson had on Sunday night last season.

It wouldn’t be a week in football without an entertaining Bill Belichick quote from a presser. After the game at the end of his press conference he was asked if Jimmy Garoppolo played great or if he was minimizing his back-up quarterback’s play and what the storyline will be…

“I mean, I’m really, really concerned about the story line,” he said. “Like, there’s really nothing higher on my list than the storyline tomorrow. We beat a good team on the road. We’ve got a lot of work to do. That’s all of us: coaching, playing, offense, defense, special teams. That’s what I saw in the game. But, I can’t wait to read it tomorrow.”

Cardinals will look to even things out and get their first win of the season next Sunday as Jameis Winston and the Tampa Bay Buccaneers come to town.