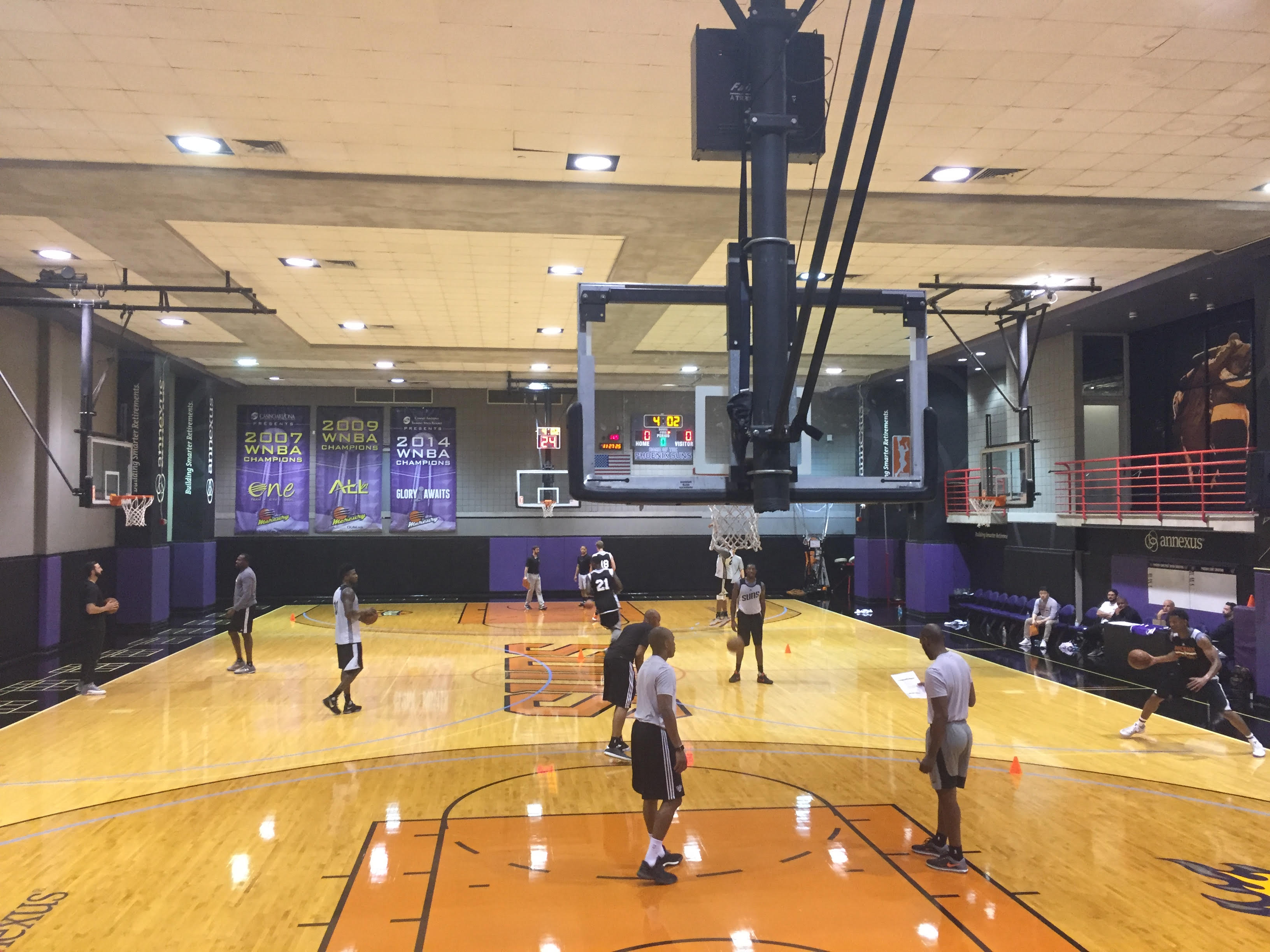 Tim Kempton Jr. admitted his NBA future is unclear because he doesn’t know whether he will be drafted on June 22 or if he will need to go the free agency route. But on Friday, he saw a dream come true.

Tim Kempton Sr., now a radio color commentator for Phoenix Suns games, played for the organization during the 1992-93 season where the team won a franchise-record 62 games and went all the way to the NBA Finals. Tim Jr. wasn’t born until a couple years after that, so he wasn’t around to witness it.

But he did grow up a Suns fan and saw the electrifying Steve Nash era turn into the present day, where the organization has had top draft picks for a few years in a row now. As a fan, he has followed the rebuilding efforts and Friday was his chance to prove he could be a part of them.

“It’s surreal. To kind of even think of that is one thing, but then to come out here and have that experience is a whole different opportunity,” Tim Jr. said. “I’m thankful for all the NBA workouts I’ve done, but this one will hold a special place in my heart and my mind, whatever happens.”

Tim Jr., a former Brophy College Preparatory standout, was a two-time Patriot League Player of the Year during his four years at Lehigh. He also totaled the most rebounds (1,095) in school and conference history during his college career.

Those interested may not find Tim Jr. on many mock drafts, but he said he feels as if he has a place in the NBA. He scored 20.4 points per game during his senior year and ended with 21 double-doubles, good for seventh in the nation.

If looking at the transition the game is making, his 41.1 percent from 3-point range as a senior is also an encouraging stat. Before his workout, Tim Jr. saw current Suns big man Alex Len on the practice floor working on his 3-point shot.

He said his passing and shooting ability could help the Suns.

“Having Len on the inside and being able to play that two-man game with Len finishing inside is something that I think I can come in and faster right away,” Tim Jr. said. “I think I could complement Alan (Williams’) mentality on the boards and just the blue-collar working mentality. Then just being able to stretch the floor with Booker and the guards they have on the floor nowadays.”

Tim Jr. is the oldest of four Kempton kids. One of his younger brothers, Michael, plays basketball at Division III Williams College. Another, Matthew, just graduated from Brophy Prep and is committed to play football at Northern Arizona University. The youngest attends school at Xavier College Preparatory.

Matthew said he remembers the days when Tim Jr. was entering high school and couldn’t even run properly because he was tall, lanky and a bit awkward. He’s come a long way since those days.

“He’s just always been someone who’s really committed his time to becoming better,” Matthew said. “I guess there’s just a lot of times I can look back and see us playing and working out. He’s always asking us if we want to go work out and stuff.”

Tim Jr. said while constantly traveling and working out for various NBA teams may by physically taxing, players in his position are supposed to take care of their bodies. Add the help from NBA training staffs and he said the physical aspect isn’t as much of an issue.

But mentally persevering through each workout is more difficult.

“Being able to wake up every day with that same go get ‘em mentality and just being able to go out there and seize the opportunity is the hardest part,” Tim Jr. said.

Asked if the bloodline would help him, Tim Jr. said that probably won’t take him very far in today’s NBA. However, it may help in a certain way because he’s been around the game for so long.

“There’s a certain sense you get when you’re around the gym from day one,” Suns assistant general manager Pat Connelly said following Kempton’s workout. “A great feel for the game is the thing that usually pops out with kids like that.”

He and his family hope he seized Friday’s opportunity because if so, it could strengthen his chances of one day playing for his hometown team. It could perhaps mean he may receive an opportunity with the franchise his dad played for and is still involved with.

Tim Jr. may not be a top prospect on draft boards, but he could potentially be a fit in today’s NBA because of his 6-foot-10 frame and shooting ability.

Not to mention the blue-collar mentality he’s proud of, and the one that continues to inspire his siblings.

“He’s accomplished what he has and has gotten to where he has through a lot of hard work,” Matthew said. “Nothing really has been given to him. He made a name for himself, he didn’t piggyback off anyone.”

Tim Jr. said he will be in Los Angeles and other places for pre-draft workouts next week. As one would expect, he doesn’t get many off days while trying to show NBA teams he deserves a shot to make the jump to the next level.

But when he does, his destination may be set.

He’s worked so hard his entire life to be in position to achieve a lifelong dream, so he may have earned himself a break.