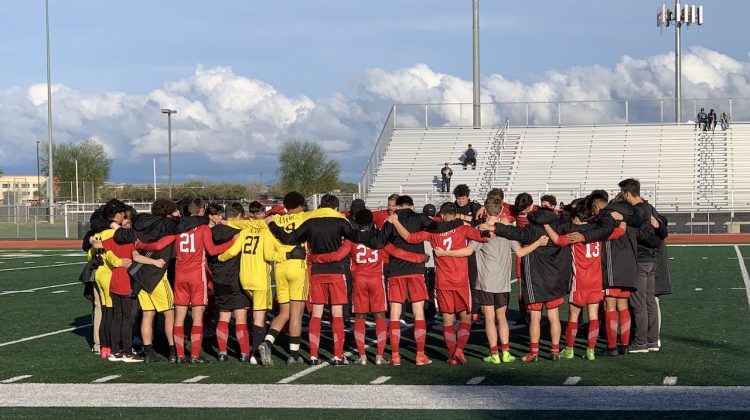 The first half was extremely well-played soccer between both teams. The majority of the first 40-minute period saw both teams volleying for position to set up their offenses, but both teams’ defenses were able to clear most balls quickly out of their side and into the midfield.

Red Mountain’s defense, led by Julian Cardenas, had an impressive first half, only allowing Brophy’s star forward/midfielder Franceseco (Case) Montanile, to minimal touches throughout the first half.

“Red Mountain is well-coached, they’re always organized and always very good in the back.” Head Coach of Brophy Paul Allen said, explaining the slow start of his team’s offense against Red Mountain’s defense.

Brophy’s offense began to get into their regular flow towards the end of the first half, but could not string together anything productive enough to send the ball into the back of the net.

The game was tied 0-0 at halftime.

After halftime, the shots on goal began rolling in for Brophy’s offense, with a ball ending up in the back of the net with 33:15 left in the second half. However, the goal would be called back because of an offsides penalty.

The Broncos would not need to wait long after that penalty for their first score of the game however, with junior Charlie Cobb scoring from within the penalty box after being assisted by junior Mason Beckman.

The Broncos found their rhythm after the first goal, and they would add to their score very quickly. Montanile scored an unassisted goal less than three minutes after his teammate found the back of the net, with 28:31 left to go in the second half.

“I found a little hole between the defenders, split it between them and was first to get to the ball and spotted it in the top left corner,” Montanile explained.

Red Mountain’s demeanor was completely different after halftime. Sloppy fundamentals and a lack of grit that was present in the first half, left the offense unable to keep the ball past the midfield line on offense.

The defensemen from Red Mountain were drained after about 15 minutes into the second half, but played hard enough to only keep the score to two goals.

Brophy will play against Chaparral high school, who they tied earlier in the season, with a final score of 1-1. Chaparral was the only team in Arizona that Brophy did not beat.

“I think we feel a little sour with that tie at the beginning of the year, so it should be an exciting matchup.” Allen said.

Brophy, the defending state champions, will be in familiar territory when they play Chaparral in the championship game, since it will be the team’s third consecutive trip in three years.

“We just got to win. I remember the feeling two years ago, losing, and I don’t want to feel that again.” Montanile said.

The championship game will take place on Wednesday, February 26, at Campo Verde high school at 7:30 p.m.