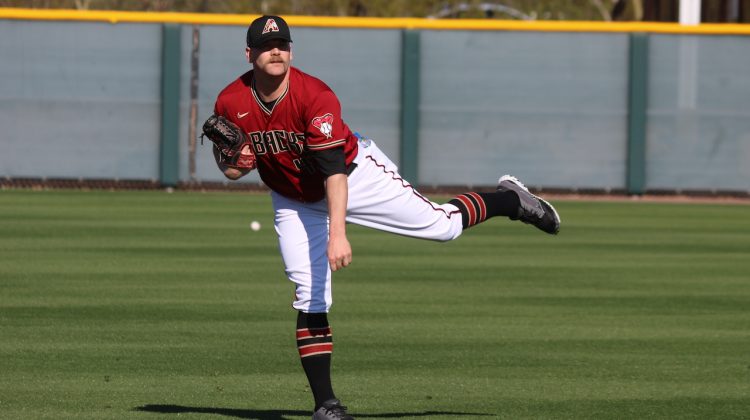 The newly-implemented three-batter minimum for pitchers in Major League Baseball is supposed to speed up the game.

That remains to be seen.

No matter the reason for the rule change, this move vastly changes the way teams use their bullpens, and especially specialists saved for specific matchups. Could this rule change weed out the pitchers who dominate one side of the plate like Byun-Hyun Kims and Mike Meyers of previous Diamondback eras.

The current D-back who would be potentially affected most by this rule change is Andrew Chafin. The southpaw has cemented himself as an option that Torey Lovullo utilized consistently against opponent’s best lefties. Of Chafin’s 77 appearances last year, he faced less than three batters in 37 of them.

So how does Chafin feel about 48% of his appearances in 2019 not being legal in 2020? His demeanor when the rule was brought up to him might give a good indication.

Of the lefty’s two signature facial features – his (almost) ever-present grin and his mustache – only one remained when I asked him about the batter minimum…and he hadn’t shaved that day.

“I get paid to pitch,” Chafin said. “I’m going to go out and pitch. Whatever they tell me to do, that’s what I’m going to do.”

The pitcher is entering the seventh year of his career, all with the Diamondbacks, and doesn’t plan to change the way he prepares for the upcoming season with the new rules in place. He said he isn’t worried that it will hurt his production, but believes the rule is attempting to fix an issue that isn’t there.

“I’m going to treat it the exactly same, be prepared to pitch on any given day as much as I need to pitch.”

The thing going for Chafin is while he’s especially effective against left-handed hitters – opponents from that side of the plate have hit .228 against him in his career – he faces right-handed batters about 40 percent of the time and the jump in hitting production is slight. In 2019, right-handed hitters hit .256 against him while lefties hit .258.

A rule like this would have been a potential grenade for players like Byun-Hyun Kim, where left-handed batters slashed about 100 points higher across the board than right-handers. But Chafin has been effective against both sides of the plate in his career.

“I preserved Andrew Chafin to the best of my ability to face the top left-handed hitter in every lineup knowing full well that he could get right-handed batters out too,” manager Torey Lovullo said. “He’s got a lot of success, it doesn’t matter who he’s facing.”

Despite the evidence “The Sheriff” can be effective against batters on both sides of the plate, Lovullo said he’s still “getting his arms around” how to most effectively deploy Chafin, who led the team in appearances last year, under these new guidelines.

“Because of the amount of usage, I would always pick those critical times and preserve him the best way I could. I can’t do that now. I’ve got to kind of reload my thoughts on what the best angle is for his usage right now.”

Lovullo revealed the team has put a new focusing on bunting for Chafin in case they need him to go to the plate after coming into the game, which hasn’t happened since 2015 and occurred only five times in the pitcher’s Major League career.

There is uncertainty on the effect this will have on the game and bullpens specifically, Lovullo feels confident featured southpaw in the ‘pen will adapt as the coaching staff does the same.

“I don’t know yet, but we’re probably going to get some thoughts and outline how we use him, but I don’t have any issues that he can face any type of hitter.”