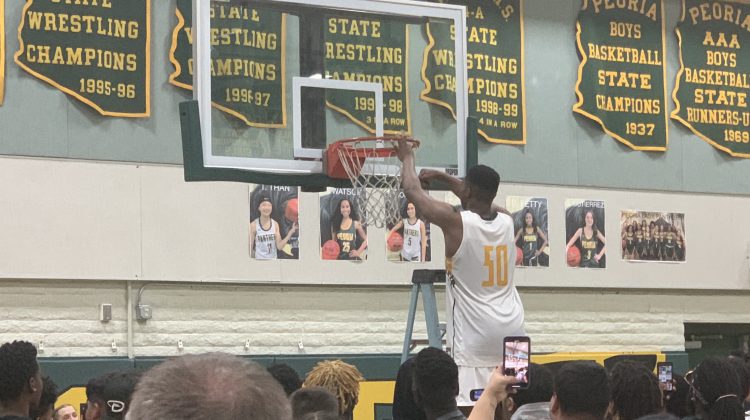 The Peoria High boys basketball team dismantled the Saint Mary’s Knights Tuesday night, 85-59, earning them a trip to the 4A State Championship game this weekend.

The win was truly a team victory for the Panthers as junior big man Kevin Kogbara and junior guard Corey Perry led the way with 19 points each.

The game was in Peoria’s control from the start, staying ahead for the entire contest – thanks to an early lead of 20-6 at the end of the first quarter.

Once the third quarter started, it was all but over as the Panthers hit four straight three-pointers to open the half, permanently putting the momentum with Peoria.

Coach Will Roberts was thrilled with his team’s hot start to the second half.

“The first four minutes of the third quarter is crucial for us always, so it’s setting the tone. We came in with the mindset we were down and we go out there and attack just like we did,” said Roberts.

The Panthers will look to have that same mindset on Saturday as they take on Tucson Salpointe Catholic for the 4A State Championship.

Tip-off from Arizona Veterans Memorial Coliseum is set for noon.