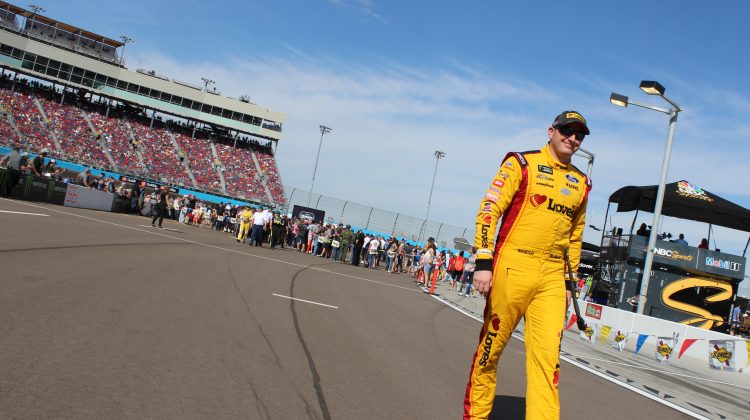 Athletes leave home. Often times, that means you’ve made it. You fly out and find a place to live in the city that drafted you or offered you that dream scholarship to play in college.

NASCAR is a little different. That city you move to is the same as everyone else. You move to North Carolina not because you made it, but because you want the opportunity to try.

The state of Arizona has been extremely lucky. In Sunday’s FanShield 500 at Phoenix Raceway, the 38-car field will be represented by three full-time drivers at the sport’s top level. While they’ve all had successful careers, they’ve all had different routes, different times entering the sport, and different reasons for loving their time when they come back home.

“We’re only here for a short period so I can’t hit every Mexican food place that I could possibly want to,” Two-time Cup Series winner, Alex Bowman said. “North Carolina just doesn’t get it done in the Mexican food department.”

Bowman is just 27 years old, driving for Hendrick Motorsports in the No. 88, made famous by Dale Earnhardt Jr.

Bowman’s journey to the Cup Series started young, leaving Arizona as a teenager for North Carolina and started racing for lower-funded teams, eventually making his way to the Cup Series, sitting in for Earnhardt Jr. after a concussion. Leaving his home state came a lack of experiencing his hometown of Tucson but he still feels a fire to win at his home track after nearly finding victory lane in 2016. He’s now the only Arizona-born driver to win in the NASCAR Cup Series.

“I moved away when I was pretty young, I traveled so much with racing I didn’t get to be 18 or 21 and kind of run around Tucson and Phoenix,” Bowman said. “I probably want to win here more than anywhere else we go just being from close by, I think that’s something that’s always been in my mind.”

That was fun. Let’s do it again for the hometown crowd?? pic.twitter.com/AeinMcz9Bl

Michael McDowell has been racing in the NASCAR Cup Series since 2008. The Glendale native grew up racing go-karts in Arizona, eventually becoming a two-time international champion. His ability to win races while turning right and left led him to win in the NASCAR Xfinity Series at Road America in 2016. The victory earned him the title of being the first Arizona-born driver to win in a NASCAR national touring series.

“I love karting, it’s what I grew up doing. I grew up at the kart track in North Phoenix, PKRA,” McDowell said. “I was there at least every other day for 15 years of my life. I grew up six miles from there, I’d ride my bike to the go-kart track. I’d like to just come back for a couple days and just have some fun and get to drive.”

He and his wife enjoy coming back home. While t’s not always possible during the race weekend, they still love to see their friends and family members when they come home.

“For years we’ve been coming out, now my kids are older and in school and it’s hard to pull them out. But we were here for Christmas, my wife and I are both from here so all of our family is still out here. We spent about ten days out here during the holidays.

“During the race weekend, it’s tough, you don’t actually get to do as much as you think you would.”

Good to back home! Ready to get on track today at @phoenixraceway. ? pic.twitter.com/vxGgTndtLV

J.J. Yeley is the most decorated Arizona driver in NASCAR, although his success hasn’t necessarily come from NASCAR. Yeley has won championships in USAC’s top tier series, dirt sprint cars, midgets, and the Silver Crown Series, one of only a few to accomplish the feat.

Yeley got the opportunity to step in at Joe Gibbs Racing in 2004. A win never came for Yeley though and has raced for lower-tier teams since 2008. Although he hasn’t found victory lane, Yeley has an established career in NASCAR with a long career lasting 17 years so far.

The Phoenix-born 43-year-old has been going to Phoenix Raceway longer than any of the other drivers with his father, Jack, taking him to watch races when Silver Crown and other series came to Phoenix.

“It’s hard to explain to people the differences in Phoenix Raceway. There used to be desert, a cactus off of turn two. I started my racing career racing a bicycle around there when I was 8 or 9 years old,” Yeley said.

“Still being able to come back here and seeing the amount of money and beautification of this racetrack knowing our championship is going to end here in phoenix is very, very cool.”

Our sport has some really good dudes, and @jjyeley1 is one of them. Just saw him take a phone from a fan without a hot pass. And he made a video for them of cars sitting on pit road, taking off for Q, and driving by on their Q laps.

Can’t describe how excited the fan was. ??

All of them still love and miss their home track but have become icons in the racing world of Arizona, being three of the best racers to ever come from Arizona. They all are as impressed with their home track as their fans are of them.

“The fact that the last three or fours its been a sell-out here, it’s awesome,” Yeley said.

“In general, the season gets busy, so the offseason is really your time to do it, but the weather’s so nice right now,” McDowell said. “It’d be great to take a boat out and go fishing today, but I don’t think that’s going to happen.”

“For me, its typically a balance of the food places I like and just trying to spend time with family and friends around here,” Bowman said, likely with a hungry stomach.

The FanShield 500 begins on FOX at 12:00 p.m. MST with Chase Elliott on the pole. NASCAR Championship Weekend will be hosted at Phoenix Raceway on November 6, 7, and 8.