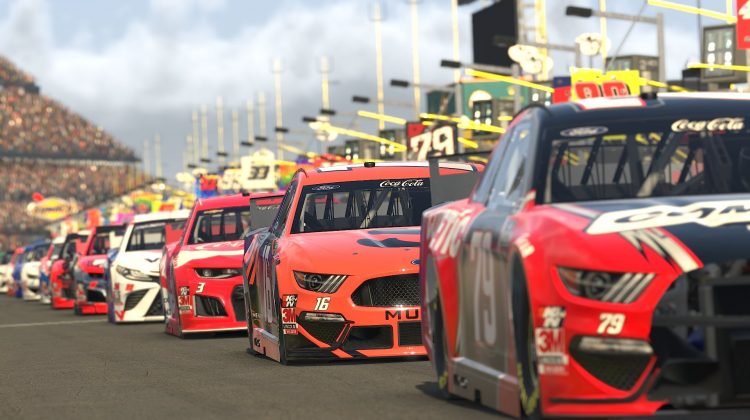 Except, it won’t be in Atlanta, GA. It will be at the virtual Atlanta Motor Speedway on the iRacing.com Motorsports Simulator.

The stars will be out on track tomorrow afternoon as we take you to @amsupdates for The Replacements 100 on @iRacing . Coverage starts at 3pm ET, with Green Flag at 3:30pm ET. You can watch the whole race LIVE at https://t.co/fSQZL9KiaG#Replacements100 pic.twitter.com/iWdj3o09j3

iRacing is often dubbed the most realistic simulator in motorsports. Professional drivers use the simulator to real test setups and allow drivers to take practice laps on laser-measured, virtual versions of real race tracks with dynamic weather, realistic tire wear and damage. In layman’s terms, it’s a virtual recreation of actual racing. With concerns over the Coronavirus, NASCAR has postponed at least the next two races at Atlanta Motor Speedway and Homestead-Miami Speedway.

iRacing and Podium eSports announced the running of the Replacements 100, a 150-mile virtual race, spanning 100-laps. The race will take place on Sunday at 3 p.m. EST. It will feature virtual replicas of NASCAR Cup Series cars, created to race like an actual car on the physical Atlanta Motor Speedway.

Since iRacing is a service that is accessible to anyone who pays the monthly subscription, Vargas’ race will be open to all iRacers and Average Joes of any kind to attempt to qualify for the feature event. Even you can have the chance to beat the real racers.

I made a Google Docs of all the drivers that count want to compete in @RyanVargas_23’s iRacing race on Thursday. So far only 37 drivers! If you’re going to compete please reply to this tweet so I can update the “entry list”#NASCAR #iRacing pic.twitter.com/Ji3zZYCAB0

Along with these exhibitions that have seemly exploded on Twitter, Sports Business Journal’s Adam Stern, reported that iRacing is working with NASCAR to create an eNASCAR race, featuring Cup Series drivers to help fill this nation-wide sports hiatus. NASCAR currently sanctions a championship series on iRacing and had their championship race broadcasted live on NBCSN last year.

.@iRacing is working with several @NASCAR drivers to set up a digital race for fans to watch amid the real season being postponed by coronavirus.

It would be impossible to get every NBA player to grab a controller and play as themselves in NBA 2K against another team. Much less with their actually on-court characteristics and personalities on display in given situations. iRacing, though, could create a unique event. Drivers have the ability to simulate and change car setups, communicate with other drivers mid-race, and race on a virtual track that is laser-scanned to act like the real thing, weather, bumps, seams and all.