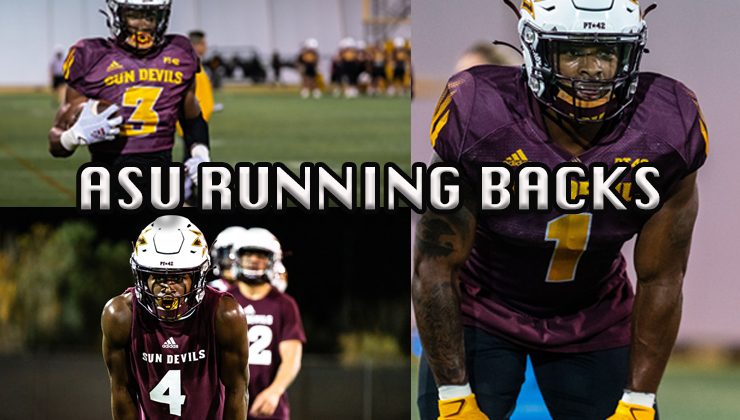 Arizona State football is set for success in the running back department with a three-headed attack. This group led the charge on offense in a rocky 2020 season.

Sophomore DeaMonte “Chip” Trayanum is the power of the group, weighing 230 pounds. He uses all of that weight to plow through defenders, but he’s also elusive enough to garner more touches. Rachaad White is the speedster, averaging 10 yards per carry in 2020. He says he’s now heavier this year and is maintaining the same speed as last year. The wild card of the group is Daniyel Ngata, who saw less touches than the former, but was impactful in both Sun Devil wins. He’s more of a slasher in the backfield who can do it all.

“It’s scary,” Trayanum said about how good they are as a trio. “Just know that we are not near to the peak of our games yet.”

They’re a nightmare for opposing coordinators, but there’s still work to be done. All three noted they’re spending considerable time developing their pass catching and blocking abilities in the backfield. There may not be a true workhorse in the group, but they’re all working to be well-rounded backs for the future. This is part of their chemistry. Competition fuels their growth, not their envy.

“They’re going to get better and better,” ASU running backs coach Shaun Aguano said. “It’s my job to make sure that they are getting better everyday, but knowing that you have three guys who are more than adequate to handle that load is comforting.”

This group is staying humble, but not when it comes to their speed. White told the media that a race is coming soon because Trayanum believes he could win. He does have a 93 yard run to prove it already.

“That time will come so you will see that,” White said. “But I’d say I’m faster.”