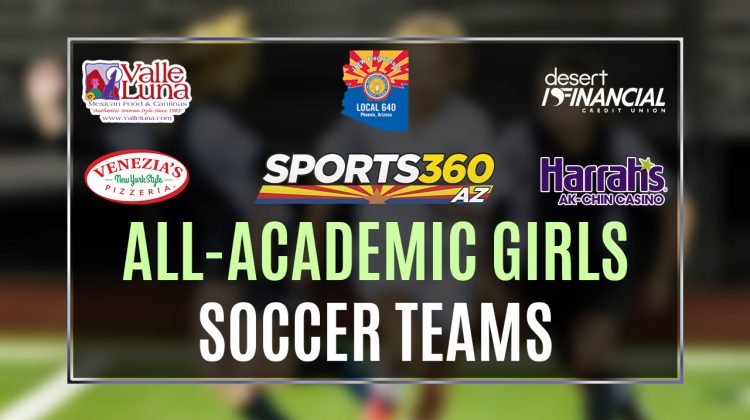 For nine years, Sports360AZ has been committed to acknowledging the best and brightest student athletes in Arizona. We are excited once again to introduce the Sports360AZ All-Academic Winter Sport Teams brought to you by IBEW Local 640, Desert Financial Credit Union, Venezia’s Pizzeria, Harrah’s Ak-Chin Casino and Valle Luna Mexican restaurants to recognize excellence of student athletes not only in competition but in the classroom as well.

We were overwhelmed by the response from players, coaches, athletic directors and parents and their nominations. This is the largest Sports360AZ All-Academic Winter Team in this recognition’s history with every sport setting a record number of nominations.

A few notes on how the team was compiled:

Sports360AZ reached out to every athletic director in the state, as well as every varsity head coach for the respective sports requesting nominations based on performance in the classroom. We also opened up nominations to parents and players as well. This is the only way to be named to the all-academic team. Thank you to the high school community for recognizing these student-athletes!

IBEW Local 640 was chartered in 1925 to provide the best-qualified Electricians to our signatory Contractors and provide livable wages, health and retirement benefits for our members. In Arizona, the IBEW is the only organization that certifies the skills and knowledge of a Journeyman Wireman, and then backs that certification with a guarantee to the employers who hire them. As new green technologies are incorporated into the nation’s power grid, Local 640 leads the way in our ability to train and provide qualified manpower for solar and wind installations in the quantities that will be required to complete these projects.

Desert Financial Credit Union was founded in 1939 by 15 Valley educators who wanted to serve their community. With just $78.75 between them, they pooled their money together to start a financial institution that would later become Arizona’s largest and most convenient locally-based credit union. Desert Financial is proud to have over 50 local branches across Arizona and over 330,000 members across the state. At Desert Financial, we have a passion for creating exceptional experiences for our members, and for giving back to our local community!

Double down on living it up in a luxurious guestroom nestled against the backdrops of the beautiful Arizona mountains at Harrah’s Ak-Chin Casino in Maricopa. You’ll experience the hottest gaming action around from your favorite slots to live table games. And with several dining options, you’re sure to find something to fill your cravings! Plus, use your Caesars Rewards card and earn special perks during your stay just by doing what you love! With amazing promotions and the friendliest staff in Arizona, you’ll find what you’re looking for in a thrilling gaming and resort experience at Harrah’s Ak-Chin Casino.

Must be 21 or older to gamble. Know When To Stop Before You Start®. Gambling Problem? Call 1-800-NEXT STEP.

Venezia’s NY Style Pizzeria is a family owned restaurant that opened in Tempe, Arizona in 1998 and now has 5 locations in Tempe, Gilbert, Mesa and North Phoenix. We offer great slice specials for under $10, as well as sandwiches, pasta, salads, desserts and appetizers! If you are looking to feed a large group you can order one of our famous Party Pizzas which feed 7-10 people and is 24 inches. Venezia’s has dine-in, takeout and delivery, and you can also order online at www.venezias.com or download our App to start enjoying these great options soon!

As a thank you for participating in the All-Academic Fall teams, Venezia’s is currently offering $4 off any order of $25 or more by using offer code: AZ1421

If you’re looking for great Sonoran food, an inviting atmosphere, look no further than Valle Luna Mexican Cantina. We invite you to enjoy the very best in Sonoran style dishes, our family atmosphere, luncheon specials, children’s menus and our fast, friendly service since 1983. With three Valley locations, you’re able to experience our tremendous menu and atmosphere no matter where you are.

Thank you so much for your nominations, and be sure to use #Sports360AZScholars when sharing these teams on social media.